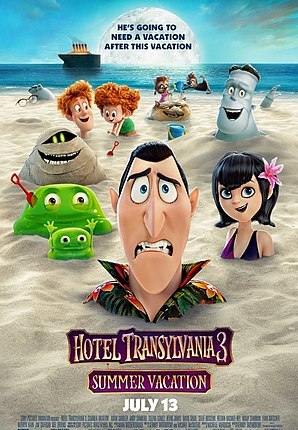 Even monsters need to take a summer vacation.

Hotel Transylvania 3: Summer Vacation (known as Hotel Transylvania 3: A Monster Vacation internationally) is the second sequel to Sony Pictures Animation's Hotel Transylvania. It is the third directing credit of the franchise for Genndy Tartakovsky and the first with him as writer, having replaced Robert Smigel from the first two films. The film is preceded immediately by the short Puppy!, which played in theaters in front of The Emoji Movie note Curious they would replay again for this movie, neh?.

It's been more than a century since the death of Dracula's wife, Martha. Feeling very lonely, Drac decides to get back into the dating game, but has a hard time. Seeing him getting overworked and stressed, his daughter Mavis decides to give him a vacation by taking him and his family and friends on a cruise for monsters aboard the cruise ship Legacy. The trip goes poorly for Drac until he meets the ship's captain, an attractive woman named Ericka. Experiencing a "Zing", Drac falls instantly in love with her, and it seems that she feels the same way. Unbeknownst to him, Ericka is actually the great-granddaughter of Drac's greatest enemy, Abraham Van Helsing, and she is trying to kill him. With an insidious trap in store, it might be down to Mavis to save him before it's too late.

The film was released on Friday, July 13th, 2018. You can watch the teaser here

Example of:
Road Runner vs. Coyote