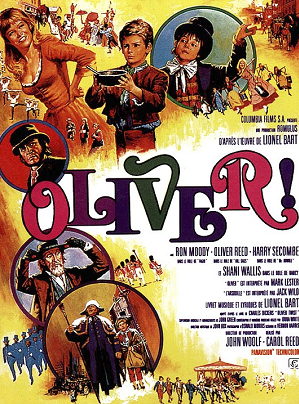 Oliver! is a musical adaptation of Oliver Twist, with book, music, and lyrics all by Lionel Bart. It premiered on London's West End in 1960, and had its first Broadway production in 1963.

The Film of the Play was released in 1968. Directed by Carol Reed (The Third Man), it starred Oliver Reed (Carol's nephew) as Bill Sikes, Mark Lester as Oliver (with his songs sung by a girl, Kathe Green), Jack Wild as the Artful Dodger, and Ron Moody as Fagin. It was the last musical to win the Academy Award for Best Picture until Chicago 34 years later, and it remains the only G-rated movie to win. The film also won Oscars for Best Director, Art Direction, Original Score, and Sound, while choreographer Onna White received an Honorary Award.

A sequel titled Dodger, set seven years later and focusing on the Artful Dodger, was staged in 2008 by David Lambert.

Other specific productions add examples of: