Spared by the Adaptation 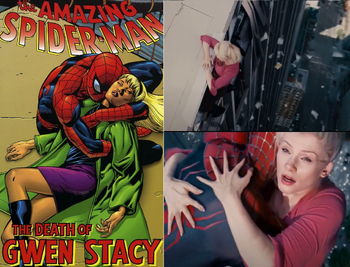 Both an adaptation trope and a death trope, Spared by the Adaptation refers to cases where a character who died in the source material does not die in an adaptation.

The reasons behind these occurrences vary. Perhaps the Media Watchdogs, Executive Meddling, and/or the creator wanted to make it Lighter and Softer than the original. Maybe the character was a fan favorite and the crew wanted to throw them a bone. Maybe the death stood out as especially pointless, and people in charge decided they didn't need to kill a beloved character just to upset the audience yet again. Maybe the material is lacking in villains, so they took a minor character and decided to amp it up and make them a real threat to the cast. Maybe they just planned to make sequels when the source material didn't have any, and wanted to save important characters for the next story. Maybe the events where it happens are cut for other reasons. The sky's the limit as for why this happens, which probably explains why it happens so often.

Likely to occur during a Gecko Ending where the adaptation is made before the original is even finished. If the character originally died in the ending, see also Adaptational Alternate Ending.

Contrast with Death by Adaptation, where a character dies in the adaptation, but not in the source material. Compare and contrast Dies Differently in Adaptation, in which the adapted character may be spared their original fate, but still doesn't make it to the end.

Warning: This is a death (or lack thereof) trope and will contain unmarked spoilers. Read the examples at your own risk.

Alternative Title(s): Spared By Adaptation, Spared In The Adapation