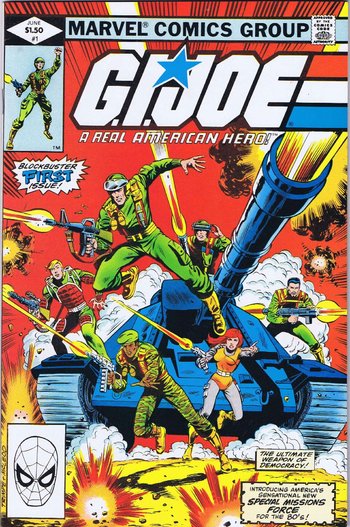 A comic series launched by Marvel Comics in 1982 to promote the return of the G.I. Joe brand to toy shelves and to introduce the new individual characters developed for the new line. GI Joe was introduced as an elite counter-terrorist/special mission force that conducted covert operations around the world on behalf of the US Government. The primary enemy of the Joes was an evil organization called Cobra. Cobra was involved in various schemes and plots in an attempt to increase the organization's wealth and power by any means necessary.

The primary writer of the comic was Larry Hama, who wrote all but a handful of issues over a twelve year run (as well as many of the character bios for the action figures). Prior to the relaunch, Hama had an idea for a Marvel Universe comic called Fury Force, which would have seen the son of Nick Fury put together a team to fight Hydra, Marvel's resident terrorist group; his G.I. Joe series was based primarily on this unused pitch. Despite a large amount of restrictions and interference from Hasbro, Hama was able to make the comic more mature than the cartoon. It allowed bloody fighting, multifaceted characterization, losses for the heroes, and characters who could be killed off, eventually growing into a functional canon that developed into a fleshed-out background for its universe.

The book proved to be very popular, in part because it was the first regular comic book to be regularly advertised on television, and at one point it was Marvel's bestselling comic. This worked well for Hasbro, because while toy commercials are strictly regulated such as how much animation of the action figures can be displayed, there is less regulation for an advertisement of a literary publication, allowing characters and other toys to be introduced with much more freedom of presentation. It was even given a spin-off comic in 1986, G.I. Joe: Special Missions, which focused less on Cobra and more on various dictators, terrorists, and more realistic enemies for the Joes to confront. This series lasted until 1989. A slide in popularity (and some would say quality) began and the regular series ended in 1994.

In 2001, Devil's Due Publishing released a continuation of the Marvel Comics series that had the premise of the Joes reforming to fight Cobra again after seven years of inactivity, which was initially published by Devil's Due Publishing's then-parent company Image Comics before Devil's Due seceded and published the comic independently. The series came to an end in 2008 in its second volume, titled America's Elite, with the "World War III" arc, which concluded with the Joes continuing to be active after finally vanquishing Cobra for good.

In 2010, IDW Publishing added G.I. Joe: A Real American Hero (IDW) to its catalog of Joe comics, effectively restarting the original Larry Hama continuity and picking up where the Marvel series had left off while rendering the Devil's Due continuity non-canon.

Perhaps the most famous issue is issue #21, which told a story without using any speech bubbles or sound effects, and has been endlessly homaged and parodied.