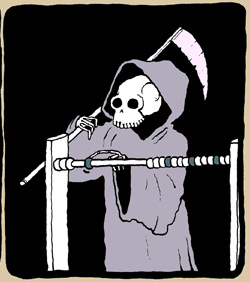 Happy Birthday.
"I told her I knew when I was going to die because my birth certificate had an expiration date on it."
— Steven Wright
Advertisement:

It's one of mankind's oldest and most useless musings... "which will be the day I die, how much time do I still have?" In real life no one knows until it's too late. In fiction, some characters only need to check their clock.

The lifetime of a character has a physical manifestation, an object from which it's ticking, flowing or trickling ominously away. What discerns a Death's Hourglass from other "impending doom in 5, 4, 3" devices is that it is long-term and personal: It's a part of the character's life for more than a few action-filled hours, long enough to have an impact on the whole mood, usually by making it more tragic. Maybe everybody has one, maybe only one character has, but one Death's Hourglass only measures one person's time.

There are two distinct varieties of this:

Modern objects that can fill this function are clocks and watches. Classic, more poetically symbolic designs are a burning candle, a withering flower, and a running hourglass. The latter frequently appears as an attribute of the Grim Reaper, the personification of Death as a scythe-wielding skeleton.

May overlap with When the Clock Strikes Twelve if the hourglass or bell is also counting down to midnight. Compare with Doomsday Clock, which is the fatalistic version of this on a global scale.