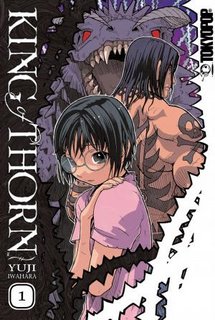 King of Thorn is a short, post-apocalyptic Survival Horror manga by Yuji Iwahara, publishing from October 2002 to October 2005. The story begins when the main character, Kasumi, and 159 other people are chosen to go into cold sleep until a cure is found for their mysterious disease, the Medusa virus. The Medusa virus is a disease which, six weeks after infection, causes the victim to have seizures; within five hours, all of the victim's cells have solidified into a clay-like substance.

A movie adaptation was released in May 2010, whose trailer you can view here

. The movie was a Pragmatic Adaptation and deviated signficantly from the canon, altering many of the characters' back-stories and omitting the Big Bad from the manga. It was nominated for the 4th Asia Pacific Screen Award for Best Animated Feature Film.

King of Thorn contains examples of: