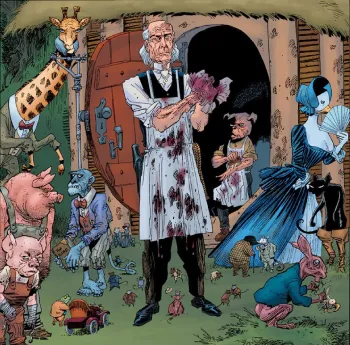 The "good" doctor... and his handiwork.
"When did mankind lose touch with natural selection? No matter how inferior a human's genes are, that person is protected by laws, and can't be killed. Even those incapacitated in accidents or stricken with a serious illness are needlessly kept alive. What a drawn out, wasteful existence. It's this divorce from natural selection that has caused mankind to stop evolving. It's a step down. The devolution of mankind. But I intend to accelerate the culling of genetically inferior humans. To rekindle the refining fire of natural selection!"
— Hans Davis, Metal Gear Ac!d
Advertisement:

Some evil mad scientists use their twisted intellect solely for personal gain. This particular villain is not so provincial. His genius and his motives go hand in hand, and his concerns are with the welfare of the human species (or so he thinks). Simply put, to the Evilutionary Biologist, humanity is stuck in an evolutionary rut, and it's up to him to put us back on the proper path so we can continue to evolve.

Why the Evilutionary Biologist believes this is necessary varies, as do his methods. Some Evilutionary Biologists simply believe that humanity has erred in its domination of the environment, and thus our very survival as a species is threatened unless they force us to continue evolving. Others see change and so-called improvement as goals in and of themselves, and resolve to use scientific advancement to cause them. Still others seek to create a new race of biologically superior transhumans or just the Ultimate Life Form with the power of science, either because they see humans as having outlived their time on the planet or because of a genuine desire to improve the human condition. Some will just be a Maker of Monsters. They often subscribe to the philosophies of Social Darwinism and "The Ends Justify the Means". It's not uncommon for them to practice what they preach and marry someone they see as fit and worthy for them.

Regardless, because of his dedication, the Evilutionary Biologist is willing to break laws, engage in experimental alterations upon other human beings, and ruin lives for the higher goal. Their creations are no less exempt; whether they're Replacement Goldfish, with the Cloning Blues, or genetically "programmed" to have evil, their "children" are doomed to live sad, short, rebellious lives, unless they really do feel parental. They will never realize that Evil Evolves, and will never be able to identify themselves as the villains.

Evilutionary Biologists often create inhuman monsters and artificial humans to serve as minions and Mooks, as well as to populate their extensive Garden of Evil. They themselves may even be willing to suffer the fruits of their experimentation, often resulting in a monstrous, inhuman new body.

Whenever an Evilutionary Biologist appears on the scene — they are the most common form of villainous biologist in many games and Speculative Fiction media — be on guard for a Science Is Bad aesop to rear its ugly head. They might as well be Eco-Terrorist who believes too much in nature, if their disregard for everything led to them carrying out sorts of terrorism.

This is especially ironic because in real biology, one of the core precepts of the theory of evolution is that it does not "improve" a species, because there is no such thing as an ideal form for a species — only what is bestnote Or rather "good enough". Products of evolution are often The Alleged Car of the natural world. Go figure

. at surviving and reproducing in current conditions. If the environment changes, the species must adapt all over again, which is why genetic diversity (Nature's way of "hedging her bets") is usually a good thing.

Moreover, assuming that a species must evolve if subjected to imposed selection pressures (or Applied Phlebotinum-induced mutations) overlooks the harsh fact that most organisms don't adapt in the face of such challenges: they simply go extinct, which is why we're not rubbing elbows with mammoths, sauropods and trilobites today. Deliberately applying such selective forces to humans may let us join them in extinction, not improve upon our current state.

Finally, evolution is conservative, and a species which is thriving (you know, like Homo sapiens) is unlikely to evolve new traits, because it's doing fine the way it is. Sharks, for example, haven't changed much since before the first dinosaurs appeared, and they're just as successful as ever... making the entire mania of the Evilutionary Biologist suspect at best.

Even so, Goal-Oriented Evolution was taken dead seriously by many back in the heyday of the eugenics movement (orthogenesis, the real evolutionary theory positing it, was tossed around for some time), and still gets cited by people who really ought to know better (Singularitarians are frequently guilty of it), along with being a common misconception of how natural selection works.

Examples of this trope will probably be German, and possibly one of Those Wacky Nazis, if we want to be really obvious.