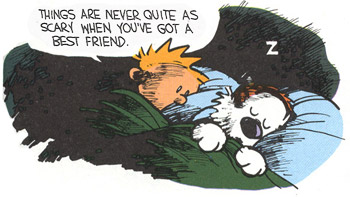 "I can't tell you just now what the moral of that is, but I shall remember it in a bit."
"Perhaps it hasn't one," Alice ventured to remark.
"Tut, tut, child!" said the Duchess. "Everything's got a moral, if only you can find it."
— Lewis Carroll, Alice's Adventures in Wonderland
Advertisement:

The episode ends with a moral à la Aesop's Fables. Either the last line of the episode summarizes the whole point of the episode, or it leaves the viewer with the issue that the writers want them to ponder. 1950s sitcoms often end on the "Gee, I learned my lesson," type of moral, while Law & Order leaves you pondering. Since some shows seem to contractually require one moral per episode, you often end up with a Broken Aesop.

A lot of kids' shows go out of their way for this, especially Disney-animated shows. Writers often call it the "Object Lesson", and write the episode around it. This is particularly noticeable in programs made in The United States during the late 1970s through the early 1990s, as the FCC at the timenote pushed by a relentless group of Moral Guardians called "Action for Children's Television" required that all networks airing children's television broadcast a certain amount of "educational" content, and this was the simplest way to meet its requirements.

What's more, this trope can also make various media like shows and so on, become an immersive experience in giving helpful advice to the audience, which makes it very popular and very unique in terms of use.

For times when a lesson is learned through a moral conflict, see Moral Dilemma.

In some quarters An Aesop delivered to another character, often a child, directly is referred to as a "You See, Timmy" from the frequent use of that line to deliver the Aesop in the television show Lassie. This definition was put forth originally in the movie Speechless.

probably doesn't deserve the dubious honor of having this trope named after him. In their original forms these stories likely did not end with heavy-hitting moral anvils. The listeners (for Aesop would have been an oral storyteller) were probably left to sort out the meaning for themselves; the one-liner morals (such as "slow and steady wins the race") were likely tacked on by modern compilers, and were often used as rhetorical devices by later orators to make a point.

An Aesop is among the Tropes of Legend. Almost every work can be considered to have an Aesop, so only put series-wide examples, or examples that have no sub-trope here.

The world and the people always change, and it's never easy. But it's how people grow. But most of the things people let go, you'd be surprised when it comes back to you.

The world and the people always change, and it's never easy. But it's how people grow. But most of the things people let go, you'd be surprised when it comes back to you.