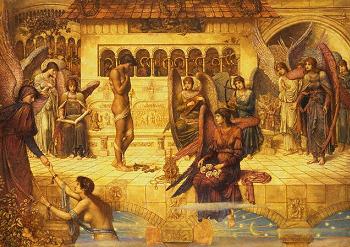 "You know, it's not so much an afterlife, more a sort of après-vie."
— Arthur Dent, The Restaurant at the End of the Universe
Advertisement:

Tropes relating to the afterlife.

Humans have often speculated what fate, if any, awaits them after death. This has been depicted in countless different ways in fiction (not to mention religion and philosophy), ranging from eternal paradise to fiery hellscapes to complete nothingness.

Spoiler warning: many of these tropes detail major spoilers about characters' fates.