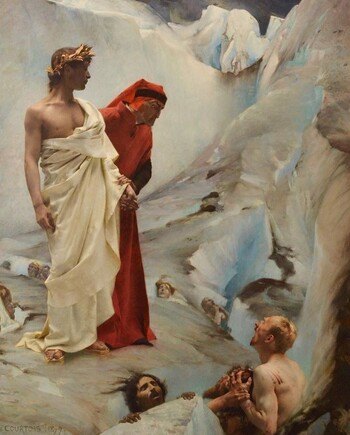 Dante and Virgil in Hell by Gustave Courtois
''I have display'd
Before him all the regions of the bad;
And purpose now those spirits to display,
That under thy command are purg'd from sin.''
— Virgil, The Divine Comedy
Advertisement:

So your character has just died and has to adjust to the wholly new world of the afterlife. Or maybe they are still alive but for some reason (or lack thereof) visit the afterlife anyway.

But why should they be left to their own devices? They're probably confused enough as it is. It's much better for them to get a Spirit Advisor to show them the best view of The Pearly Gates, the nicest places in Nostalgia Heaven, and/or the structure of the Circles of Hell that they have (hopefully) avoided.

The trope's earliest mentions are Older Than Dirt, with Enkidu in the last tablet of The Epic of Gilgamesh journeying to the netherworld and afterwards explaining its order to his friend. However, the ultimate Trope Codifier is The Aeneid (with, unusually, another living human acting as guide).