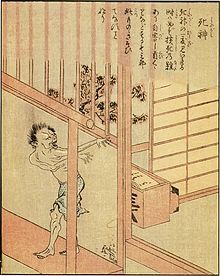 The Japanese version of The Grim Reaper. Contrary to popular belief, they aren't part of traditional Japanese mythology, but got imported from Europe in the 19th century. Originally used to refer to a single entity featured in the play "Shinigami" (usually translated as "death god," but the word is "kami

Japanese religion and spiritualism being highly syncretic, features of preexisting Taoist, Buddhist, and Shinto death entities appear to varying extents in different depictions of shinigami. For instance, the idea of a highly stratified and bureaucratic society of psychopomps and divine judges seen in series like Bleach, Descendants of Darkness, and YuYu Hakusho originated in Chinese Buddhism, on the model of the massive Han bureaucracy in the living world.

Since being with every human who ever dies would require omniscience to a story-breaking degree, it's often explained that shinigami are only related to special cases of death, and hopefully whatever universal mechanism in place applies to non-special cases. For these reasons, opposing the work of a shinigami is harmful to both the dying and the opponent.

Shinigami are sometimes depicted as goblin or skeletal creatures who cause death and accidents, but some popular and more recent depictions of shinigami are closer to Western vampires, with them being portrayed as immortal, attractive, hip, young people who wield a variety of superpowers, chief among them Soul Power (dancing skills not included). They will usually either cause death to sustain themselves, peacefully escort souls to the afterlife (see Psychopomp), slay demons and poltergeists who cause unnatural deaths, or be the result of unnatural deaths, themselves (interestingly similar to the first definition of shinigami, though this is almost never brought up). Or, various combinations of the above.

In a few instances, their counterparts are "angels". Only superficially the Judeo-Christian variety, as they tend to be ex-humans, too. A mix of Japanese Mythology and Fluffy Cloud Heaven. Compare and contrast Archangel Uriel.

Compare The Grim Reaper and Psychopomp. Also, try not to confuse these with shikigami.