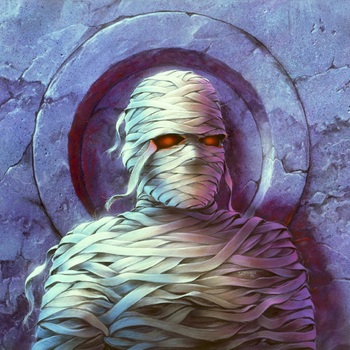 Dying is rough. All a pharaoh wants is a nice place to rest, surrounded by his (equivalent to) millions of dollars in loot and valuable ancient artifacts, but there's always some joker that wants his stuff. So, the Mummy's gotta get out of his cozy sarcophagus and open a can of curse-ass in his shambling, arms-straight-out, wrapped-in-bandages, way.
Advertisement:

He doesn't really care if he's attacking genuine grave robbers or archaeologists who want to put him in a museum. He just knows that they are defiling his tomb. He's not necessarily smart or powerful, but when his icy hand grips someone's shoulder, even the manliest of men will let out a girlish scream. Sometimes he can announce his entrance with "Who Dares? to disturb my sleep?!" or something similar.

The mummy is one of The Undead, and typically a Sealed Evil in a Can. When active, its behavior is quite similar to the Zombie, Artificial or otherwise, but its embalmed flesh and ancient magic render it far sturdier than its rancid urban counterparts, to the extent that it is practically Implacable. Which is ironic, considering the opposite is true in real life; a real mummy will crumble to dust if you're not super careful with it.

More recent examples (mostly inspired by the 1999 film and its sequels) may make the Mummy closer to a lich or vampire, giving it more individuality and brain, as well ample magical powers (such as the ability to command "lesser" mummies and local Egyptian wildlife like scarab beetles).

The Mummy completes the classic quartet of Dracula, Frankenstein's Monster, and the Wolfman. The four are the famous villains of the 1930-40s Universal monster movies.

When seen in kids' shows, brace yourself for a punnicane along the line of "I want my 'mummy'!", or for people pulling the linen and causing them to twirl like a top. For teen or adult audiences, expect a creep-out reference to how mummies' brains were extracted during the preservation process.

The other stock Egyptian style villain alongside the Nepharious Pharaoh — there is a high chance the mummy was one of those before he died. See also Mummy Wrap; for the entirely different type of character, when the mummy is female, beautiful, and serves as a Love Interest, see Seductive Mummy. Compare the Curse of the Pharaoh — sometimes the mummy themselves may be the instrument of revenge against those who dare to disturb their tomb, but this is not required. If the (rare) chance the mummy is friendly, see Chummy Mummy.

Also note that mummification rituals were not unique to Egypt. Thus, mummies may occasionally crop up from different necks of the woods, with Mayincatec mummies as probably the closest runner-up to the Egyptian variant in terms of popularity.

The Human Popsicle can serve as a science fictional variant on the mummy concept, depending how dead they were when they were frozen and how normal they are when they're revived.

Stock Monster Symbolism related to mummies include: The present being invaded by forgotten times of history dominated by superstition and brutal kings; the West's exploitation of Africa; and Medical Horror (both related to the embalming process itself, and the simple gag of mummies being covered in bandages).