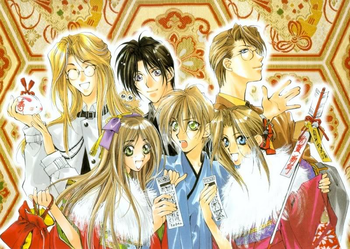 Asato Tsuzuki is a shinigami who has been working in the afterworld for 70 years (with a low wage), investigating cases related to unnatural deaths. Although he is very capable, he is constantly in trouble because of his laid-back and spacey attitude, and his inability to retain a partner. Things seems to improve when Tsuzuki is assigned to work with the new shinigami Hisoka Kurosaki, a teenager with a very serious attitude, in contrast with Tsuzuki's playfulness. Unfortunately, in their first case together they cross paths with the insane Doctor Kazutaka Muraki, a man who has gotten supernatural powers in very questionable ways. The doctor is involved in a lot of dirty business (including the death of Hisoka), and now wants Tsuzuki...

Descendants of Darkness (Yami no Matsuei in Japanese) is a manga which began in the shoujo magazine Hana to Yume in 1996. The author took a hiatus in 2003, leaving the series unfinished until January 2010, in which volume 12 was released. The series is, however, being continued as of recent notification.

A 13-episode anime was produced by JC Staff in 2001. In the U.S., it was initially licensed by Central Park Media, and aired on the Sci Fi Channel's Ani-Monday block in 2008. It is currently licensed by Discotek Media, who have announced plans for a future DVD rerelease.