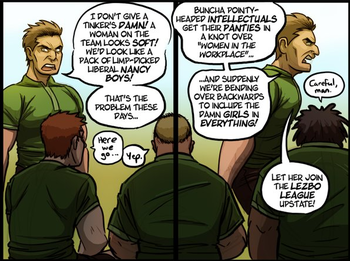 The partial Spear Counterpart to Does Not Like Men, this is when one of a character's major defining traits is their hatred of women.

This trope is played for laughs more often than not — often a part of the Unsympathetic Comedy Protagonist or the Butt-Monkey's personalities. In earlier works a character's outright fear of women was treated as a running gag. Dramatic protagonists who don't like women usually don't like other men that much more. Perpetrators in Crime Dramas will often have this as the root rationale for their crimes against women.

Women who don't like men will often be portrayed sympathetically, but members of this trope are usually written to either receive Character Development or be a one-dimensional Straw Misogynist. This mentality exists because there is a long history of women being viewed as second-class citizens throughout many cultures in Real Life. However, this approach can result in a misogynist being seen as Unintentionally Sympathetic, and/or a misandrist being seen as Unintentionally Unsympathetic, by the audience. This becomes especially so if the latter takes their dislike of men too far while still being treated as a victim by the narrative.

The Trope Namer in this case is The Little Rascalsnote who aren't actually an example of this trope, who held meetings of the "He-Man Woman Haters Club" on more than one occasion, including the animated episode "Beauty Queen for a Day".

If the male in question hasn't hit puberty yet, that's Girls Have Cooties. Compare Celibate Hero (considers women a distraction), Politically Incorrect Hero (good guy with bad views), Effeminate Misogynistic Guy (usually where the gay examples of this trope fall), Female Misogynist (women who hate women), and Straw Misogynist (hates women, And That's Terrible). Not to be confused with a (nonexistent) Masters of the Universe spinoff about the titular hero being an example of this trope (for the record, none of his official incarnations are this).