Literature / Rally Round the Flag, Boys! 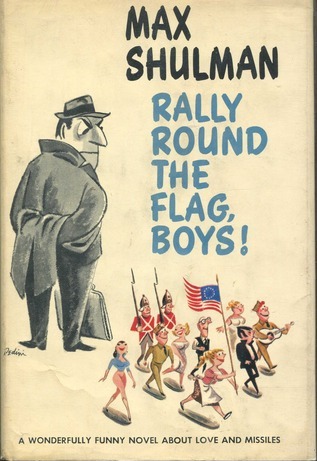 Rally Round the Flag, Boys! is a 1957 comic novel by Max Shulman.

Putnam's Landing is a typical suburban village of Fairfield County, Connecticut, whose main industry is raising large families for New York City commuters. The town's status quo, zealously maintained by the Yankee descendants of the original settlers with the help of the Italian immigrant community, is disrupted when the United States Army buys up one hundred acres of Johnnycake Hill for a Nike guided missile installation.

Betty O'Sheel's well-researched plan for the town to build a modern garbage disposal plant is buried indefinitely. Lieutenant Guido di Maggio barely avoids being shipped off to Fairbanks, Alaska by seizing the opportunity to run the 992nd Anti-Aircraft Missile Battalion public relations campaign in Putnam's Landing, where he was born and raised, though his fiancée, Maggie Larkin, takes objection to his own management of a Little League team. Angela Hoffa, tired of her television-producer husband Oscar, plunges into an adulterous affair with Harry Bannerman, a commuter discontented with the civic preoccupations of his wife Grace, who has just been pressed into becoming chairman of the Nike Hospitality Committee. Isaac Goodpasture, the conservative Yankee editor of the Putnam's Landing Gazette, finds that his sixteen-year-old only daughter Comfort has suddenly become interested in boys. And a long-simmering rivalry develops between the New Delinquents of Webster High School and the group of youthful soldiers shipped in from Fort Bliss, Texas.

The Film of the Book, released in 1958, was directed by Leo McCarey and starred Paul Newman as Harry Bannerman, Joanne Woodward as Grace Bannerman, Joan Collins as Angela Hoffa, and Jack Carson as Captain Hoxie.

Tropes appearing in Rally Round the Flag, Boys! include: