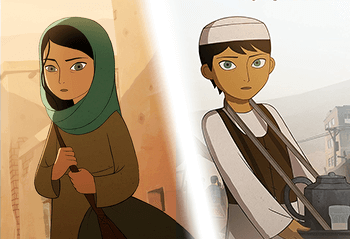 "As sweet Polly Oliver lay musing in bed,
A sudden strange fancy came into her head.
Nor father nor mother shall make me false prove:
I'll 'list as a soldier and follow my love.
So early next morning she softly arose,
and dressed herself up in her dead brother's clothes,
She cut her hair close, and she stained her face brown,
And went for a soldier to fair London town."
— English Folk Song
Advertisement:

A female character dresses up as a man to accomplish some end. Often becomes a variant of the Jackie Robinson Story. The sports version is especially popular in children's media, since it allows for an Anviliciously contemptuous boys' team for the heroine to win over with her talents.

Named for the old, old folk song "Sweet Polly Oliver" (quoted above), in which a woman disguises herself as a man so she can join the army and follow her soldier lover. However, the trope predates the name, going back further to The Ballad of Mulan, a 5th-6th century AD Chinese myth. And of course, women disguising themselves as men in order to join the military has happened time and again throughout history, for any number of reasons—a deeply held desire to do so, a living in times when there was no other way to support herself, even getting away from a terrible situation at home.

If a girl dresses like that all the time, she might be a Wholesome Crossdresser. Sometimes the audience (or a character) doesn't know this at first, and is surprised to find out Samus Is a Girl.

Contrast with Harmless Lady Disguise, Moustache de Plume, and Disguised in Drag; is a type of She Is the King (Type 1, to be specific). Some men may subconsciously see through this, and become Sweet on Polly Oliver. Since, in most cultures, she needs a new name, may occasion a Meaningful Rename. Not to be confused with Bifauxnen. If employing this trope allows a female character to be the first of her gender to achieve something, she's Breaking the Glass Ceiling (or sneaking past it, anyway).

Many times when this is done in film and TV, the actress playing the crossdressing character rarely does a convincing job (see Hollywood Homely), requiring Suspension of Disbelief on the part of the audience that the other characters encountering her really believe she is male. On the other hand, quite a few women really did get away with this surprisingly easily in the past, which The Folklore of Discworld phrases as:

in an age before unisex fashions, trousers meant 'man' and skirts meant 'woman'. Trousers plus high-pitched voice meant 'young man'. People didn't expect anything else, and saw what they expected to see.

To make it easier for the audience to believe that Sweet Polly Oliver passes for male, she'll often be tall and lack curves. If she begins crossdressing at a young age, she might worry about it being harder to pass when she goes through puberty.

As a type of Weirdness Censor, the human mind will simply ignore small details that could give the ruse away, once it has classified a person as either male or female. And in societies in which male and female gender roles are clearly separated with no room for overlaps, this effect would be even stronger, as the idea of meeting a cross-dresser would be even more inconceivable than it is today.

You can listen to the full version of the song here.

While Serena takes care of the ailing Ash, a rock star trainer shows up to challenge Ash to a Pokemon battle with their respective Pikachus. Knowing that Ash will accept the challenge if he wakes up, despite being in no condition to do so, Serena disguises herself as Ash so that she can battle in his place.

Alternative Title(s): He Is A She, Disguised As Male

While Serena takes care of the ailing Ash, a rock star trainer shows up to challenge Ash to a Pokemon battle with their respective Pikachus. Knowing that Ash will accept the challenge if he wakes up, despite being in no condition to do so, Serena disguises herself as Ash so that she can battle in his place.