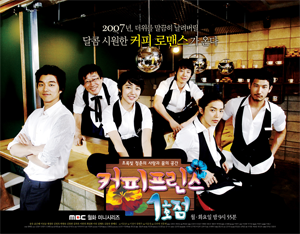 "I’ll say this just once, so listen to me. I like you. Whether you’re a man, or an alien...I don’t care anymore. I tried getting rid of my feelings, but I couldn't. So let’s go, as far as we can go."

Based on a novel of the same name, The First Shop of Coffee Prince is a Korean drama that aired in 2007. Go Eun Chan (played by Yoon Eun-hye) is a tomboyish girl working multiple jobs to support her mother and sister. Choi Han Kyul (played by Gong Yoo) is the charming son of a wealthy family, and has never held a job in his life. The two meet by chance and Han Kyul assumes Eun Chan is a boy (and a thief). He ends up hiring her to pose as his "gay lover" when he goes on blind dates set up by his mother and grandmother. His grandmother decides to take a different approach - he has to take over management of a failing coffee house the family owns. If he can triple her investment in three months, she will leave him alone to live his life as he chooses. Otherwise, he will have to submit to the blind dates and eventually settle down.

Han Kyul decides the shop needs a gimmick, so he renames it "Coffee Prince" and hires four "princes" — including Eun Chan — to work there and attract female customers. Han Kyul finds himself falling for Eun Chan, which is all well and good except for the fact he still thinks she's a guy, and he's straight. For her part Eun Chan is afraid that a) she'll lose the job at Coffee Prince if Han Kyul finds out she's a girl, and later b) he'll be upset if he finds out she's been lying, even as their connection deepens. Which adds up to fighting, misplaced emotions, longing looks, and misunderstandings. Add the secondary couple, who both characters dabble with emotionally, and you have everything kdramas are known for.

It's not without its cheesy or clunky moments, but almost everything - the performances, the writing, the music - make this drama more entertaining, more endearing, and more satisfying than most.

'"The First Tropes of Coffee Prince":