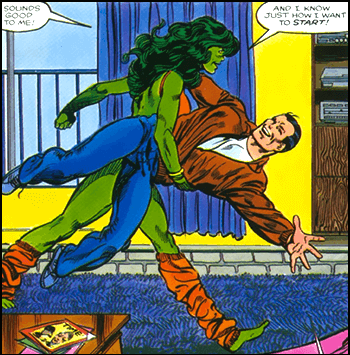 Don't worry about him. He LOVES this!
"Oh, he's lighter than I thought."
— Colette Brunel, Tales of Symphonia, after picking up Regal Bryant
Advertisement:

You have your regular Action Girl. She has the looks, and the attitude. But you want to indicate her strength, without having her beat the crap out of someone. That's where Effortless Amazonian Lift comes in.

A Distaff Counterpart to Bridal Carry, this refers to a woman visually displaying the strength to lift and carry someone similar-sized or heavier than herself in her arms. This trope is used in an attempt to subvert gender expectations, and show that the woman in question has unusual physical strength. When involving a couple, it can also be used to show who wears the pants in the relationship. Usually displayed by a Cute Bruiser or a Big Gal. When done by someone with no such characteristics, it is even more notable.

Note that this does not refer to a woman simply carrying something. The action must always emphasize her prodigious strength.