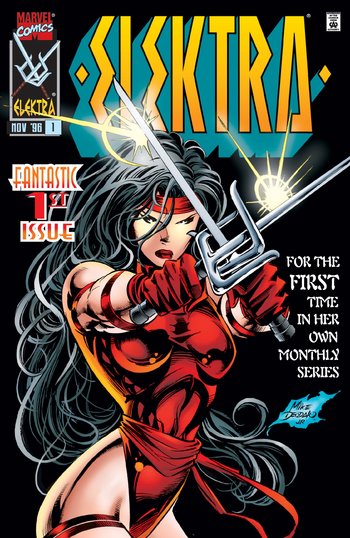 "Once upon a time... there was a beautiful princess. So the warrior princess became a ronin and a whore. A warrior for hire. She sold her talent and rage to anyone who was willing to buy it. But she found that her life ran in cycles. That the same players came in and out of her life no matter how far she ran and no matter how much she learned. Old love kept returning. And old debts left unpaid came back to haunt her. And even that final disappointment of a warrior's death brought her no peace. Because the way of the ninja is to know that life and death are nothing but energy pushed and pulled. The princess was brought back to life. Brought back from 'the Place of No Name'... to finish a fight she did not start."
—Elektra

Elektra Natchios is a Marvel Comics anti-hero created by Frank Miller. Making her debut in Daredevil #168 (January, 1981) as Matt Murdock's college love-interest-turned-assassin, Elektra is one of Daredevil's most dangerous, unpredictable enemies. Originally a college student at New York's Columbia University with her boyfriend, Matt Murdock, the Greek-born Elektra left for Japan after the accidental death of her father. Encountering Stick, leader of the secret martial arts organization known as the Chaste, Elektra's fighting skills were honed to peak human levels. Unfortunately, the hate in her heart got her expelled from the Chaste, so Elektra joined their rivals, the Hand. Corrupted by the Hand, Elektra became the organization's top assassin until breaking free from their control and returning to New York.

After the Man Without Fear saves her from mobster Eric Slaughter and his hit-men, Elektra learns Daredevil's secret identity and tries to rekindle their relationship, only to be rejected because of her killing ways. Together, the former lovers battle and defeat the Hand after the organization attempts to kill members of the Chaste. After Elektra became The Kingpin's chief assassin, Elektra and Daredevil battle continuously until she was ordered to kill Franklin "Foggy" Nelson, Matt Murdock's best friend. Unable to kill Foggy, who recognized her as "Matt's girl", Elektra was forced to battle Bullseye, the Kingpin's former chief assassin. Elektra fought hard but was defeated by Bullseye after he impaled her on her own sai. Mortally wounded, Elektra crawled to Matt's doorstep and died in his arms. Resurrected thanks to Daredevil and Stone, an associate of Stick, Elektra traveled the world as a freelance assassin/bounty hunter. After aiding S.H.I.E.L.D., Wolverine and her former lover Daredevil, Elektra was replaced by a Skrull agent named Siri prior to the Secret Invasion event. Once freed, she became more involved in the superhero community and began walking a careful line as an Anti-Hero — not evil, not good, just herself.

She is currently acting as the new Daredevil in Chip Zdarsky's Daredevil.

Jennifer Garner played the character in the 2003 Daredevil and her 2005 spinoff, Elektra. Most recently, in the Netflix adaptation of Daredevil (2015) and The Defenders (2017), she has been portrayed by Élodie Yung. Not to be confused with Elektra Records.