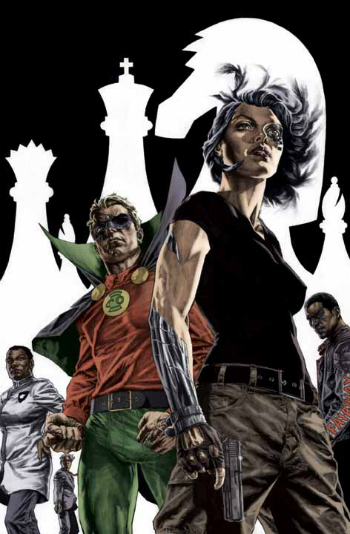 A spy organization in The DCU, Checkmate has been the focus of two ongoing series and maintains a presence in the DCU, both comics and film.

Originally known as "the Agency", the organization that would become Checkmate was a driving force in the mid-80s comic Vigilante. After Vigilante ended, the Agency changed its name to Checkmate in Action Comics in 1988 and gained a spin-off title the same year. Checkmate became a subset of the Suicide Squad under the ultimate authority of chessmistress extraordinaire Amanda Waller through her agent, Harry Stein. This volume lasted 33 issues, from 1988 to 1991, and was written by Paul Kupperberg.

Between volumes, Checkmate maintained a background presence throughout the DCU, making their most significant appearance in Greg Rucka's Bruce Wayne: Murderer and Bruce Wayne: Fugitive arcs, which introduced the character of Sasha Bordeaux, who would go on to become the agency's main character for the next decade.

In The OMAC Project by Greg Rucka, during the lead-up to Infinite Crisis, former JLA ally turned evil Maxwell Lord took over Checkmate until Wonder Woman killed him. This led to the events of volume 2 by Rucka and Eric Trautmann. This series saw Checkmate reformed under the United Nations as an Multinational Team with both human and superhuman operatives and a system of checks and balances dependent on the four Kings and Queens (including Sasha and, of course, Amanda Waller) to prevent another Max Lord incident. The series ran for 31 issues, from 2006 to 2008, and was critically acclaimed.

In 2011, Checkmate was taken over again by Max Lord, who was resurrected at the end of Blackest Night, and became a rogue organization. Following Flashpoint, it became the GPA-counterpart to the New 52 O.M.A.C., still run by Max until he got imprisoned in Justice League vs Suicide Squad. Checkmate was subsequently destroyed along with all the other spy organisations at the start of Event Leviathan, but a new incarnation was introduced in Leviathan Dawn, spinning into its own series.

Outside of comics, Checkmate has also appeared in Smallville and the Green Lantern (2011) movie.