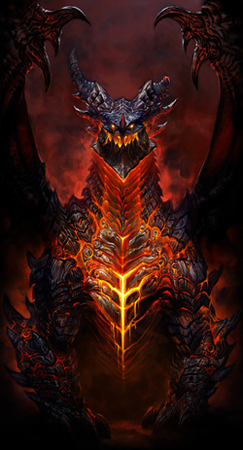 Deathwing the Destroyer.
"The Blades are wise not to trust me. Onikaan ni ov.note Roughly, "Wise not to trust." I would not trust another dovah. Dov wahlaan fah rel.note Dragons built in order to dominate. We were made to dominate. The will to power is in our blood. You feel it in yourself, do you not?"
— Paarthurnax, The Elder Scrolls V: Skyrim
Advertisement:

When it comes to representing evil in a given story, a common form it takes is that of the dragon. While in East Asia dragons were often seen as benevolent or at least neutral deities, the most common depiction of dragons in Europe, especially post-Christianity, were as evil beings that were often used as a stand-in for Satan himself or those directly under him. (The Greek drakon and Latin draco that the word "dragon" derives from literally mean "one who stares", referring to large snakes and occasionally crocodiles and alligators.)

One of, if not the most common scenarios in a fantasy story is the hero slaying a dragon, either as a literal example of The Dragon, or as an Arc Villain or Big Bad in their own right. It's common, though not compulsory, for these dragons to be dark in color, and capable of breathing dark or green colored flames (whether literal Hellfire or not), or poison breath. A Dracolich often falls under this, due to the association between the undead and evil.

Compare Reptiles Are Abhorrent, and especially Snakes Are Sinister for older depictions. If they have religions based around them or are otherwise treated as deities or divine beings, they may also fall under Dragons Are Divine (albeit as evil deities). There's also a heavy overlap between this trope and Draconic Abomination, and if a demonic dragon is feathered, it falls under Feathered Fiend as well.