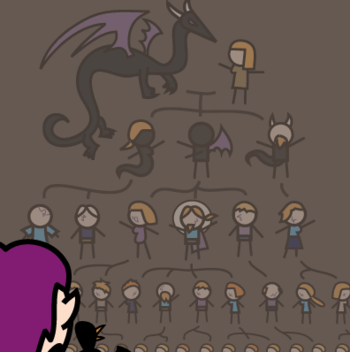 "Dragonborn, huh? Was it your ma or your pa that was the dragon?"
— Hadvar, The Elder Scrolls V: Skyrim
Advertisement:

In fiction, different races can often interbreed. Some are more likely to interbreed than others.

Dragons have gained a bit of a reputation for being able and willing to breed with just about anything, if not everything, leading to some interesting mixes (a reputation they often share with humans). This is often because the dragon is capable of transforming into a human form for reproductive purposes. Sometimes you can get a Draconic Humanoid, other times you get someone who is otherwise normal, except for maybe a few off traits.

This is often the result of an Interspecies Romance where one partner is a dragon. See also Weredragon, which is a common ability for those who are part dragon.