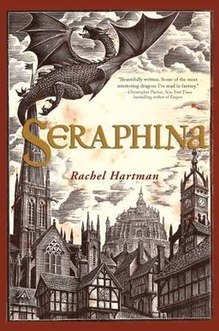 Seraphina is a Young Adult Fantasy duology by Rachel Hartman. It comprises the novels Seraphina and Shadow Scale, as well as a prequel novelette, The Audition.

Set in a country similar to medieval Europe, Goredd, the eponymous Seraphina has just been granted a position as assistant to the Royal Court’s composer. The forty-year anniversary of peace between humans and dragons is approaching when Prince Rufus of Goredd is murdered in a suspiciously dragon-like manner. Seraphina is caught up in the mystery, trying to discover the culprit and protect the tenuous peace while guarding secrets of her own.