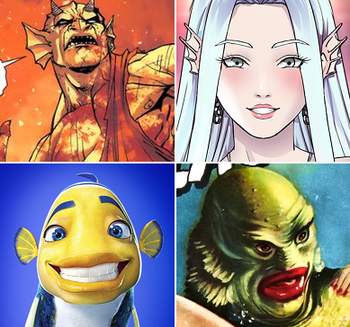 A common physical feature for mermaids, Fish People and other aquatic characters - a set of fins on each side of the head, where the ears would be on a human. If they are explained they will often be some form of external gills. If merfolk are not entirely human above the waist, they often have a few minor "fishy" traits, such as ear fins, arm fins or scattered scales on the skin.

If used on an otherwise human looking character, this can be the aquatic equivalent of Little Bit Beastly. It also makes them look like they have a complete fish for a head so audiences can make the connection more easily, and helps show their aquatic traits even in closeups of the head.

These have been occasionally used on non-aquatic characters too, such as monsters or aliens, generally to emphasize their other-ness, because it's such an unusual and distinctly non-mammalian trait.

A Sub-Trope of Pointy Ears and Unusual Ears.