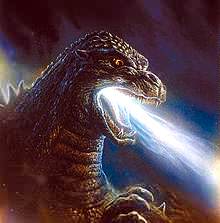 Myth and folklore are replete with dragons and other creatures spewing fire, corrosive venom, noxious gases, energy beams, lightning, and other exotic and catastrophic exhalations from their mouth. More modern media have applied the motif to fantastic beasties, Kaiju, creatures from alien worlds, mutants, zombies, and even the occasional robot, and expanded the effects to encompass blazing beams of coruscant annihilation. In other words, bright things coming from the mouths of big things that can destroy other things.

Classically a trait of creatures that are, at least physically, animalistic — no matter how erudite and noble they may be. When humanoids vomit destruction from their mouths, they almost always have at least a hint of corruption or, at best, atavism about them. According to anthropologist David D. Gilmore, this is because of the mouth's symbolism as the organ of predation, evoking one mankind's primal fears of what used to hunt them. Given that a human being's only experience with oral expulsions is usually spit or vomit (or in the case of certain snakes, venom), it may then follow that anything coming out of the mouth is unpleasant. Whatever the reason, it's right up there with Glowing Eyes of Doom as a surefire sign of inhumanity. Heroes will generally emit blasts of destruction from their palms or their eyes instead (though villains can do that too). This is also why, in Primate Versus Reptile stories, the reptile is more likely to have the Breath Weapon than the primate.

A number of Breath Weapons are especially common:

Typically, any given character or creature only has one breath weapon. Multiple ones per person are very rare, and usually indicate that the user is special in some way. The primary exception are many-headed creatures; in these cases, it's common for each head to have a different breath weapon.

A particular type of Street Performer or member of The Freakshow — known variously as a "fire-breather" or a "fire-eater" — uses the magician's sleight-of-hand to appear to do this. Such examples can go on this page as well, since such tricks can be extremely dangerous for both performer and audience.