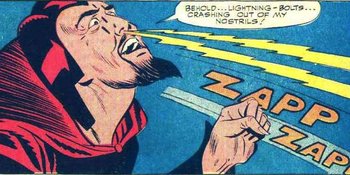 Do you want a kleenex?
Advertisement:

In the hero biz it's not only important what your power is, but how you use it. Outside of Toilet Humor, few things are weirder than using your own nose for attacking, either by using it as a melee weapon, or shooting any kind of projectile from it.

Most times this is played for laughs for the sheer ridiculousness of the situation, so expect this to be a one-time thing, or for a one-shot character. Sometimes if this becomes something regular then the joke will become repetitive and...it'll just become how they use their attacks.

Common for characters based on elephants. May involve some weird Nose Nuggets. Do not confuse with Spraying Drink from Nose. Compare Sneeze of Doom. For characters that jab with nose-like body parts (beaks, bills, etc.), see Beak Attack and Swordfish Sabre.