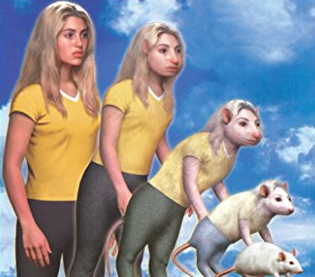 "Ford, you're turning into a penguin. Stop it."
— Arthur Dent, The Hitchhiker's Guide to the Galaxy
Advertisement:

A character is transformed into an animal, either completely or partially (as in Two Beings, One Body). There's always an accompanying trope, based on whether their transformation was Voluntary Shapeshifting or not, the latter meaning it's an example of Forced Transformation as well:

The transformation itself may be scientific in origin, or mystical. Popular mystical transformations include werewolves and other werebeasts, wolves (who may be confused for werewolves), vampires transforming into a singular wolf or bat or some other animal, transforming into a swarm is under One to Million to One; Or such chestnuts as a witch turning people into toads. And who can forget such classic fairy tales such as swan maidens or The Frog Prince? In fact, Animorphism is Older Than Feudalism, with The Odyssey describing Circe turning Odysseus' sailors into pigs.

See Transflormation, another morphological shift. Contrast with Humanity Ensues, the rarer converse in which animals transform into humans.

Not to be confused with the Sliding Scale of Anthropomorphism. See also Beast Man, the more meta version to do with character design. If this character is a superhero or supervillain, then they are an Animal-Themed Superbeing.

Not to be confused with anamorphism

When boys spend a long enough time on Pleasure Island, they make literal jackasses of themselves.

Alternative Title(s): Turning Into An Animal

When boys spend a long enough time on Pleasure Island, they make literal jackasses of themselves.