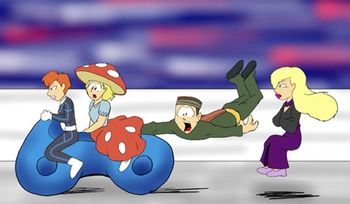 Trawn, Shroomy, NJ, and Aerynn will bring peace to Cyberspace...eventually.
"Welcome to the internet...of the future! It's evolved beyond its dimensions and become a fully immersive virtual world! Anyone can log onto this world from anywhere and take on any form or shape! Some only come to check their email or bank account...others spend much of their lives here. Some find jobs. Some find love. Some get robbed. Some get scammed. Some get ruined. And some do the ruining. The truth is that, no matter how advanced things get, the same problems of the past exist in the future."
— Introduction to Pilot
Advertisement:

in 2007. Unlike the other flagship series, it has a strong reliance on continuity and connecting events. Set in a futuristicnote Word of God says each comic takes place approximately 100 years after Peter wrote it, Internet-based City of Adventure called "Nettropolis", the comic focuses mainly on the staff of the Nettropolis Free Press, which originally consisted of Intrepid Reporter Eileen "Trawn" Peccadillo, pompous ninja NJ, naive painter Shroomy, and unpredictable Magical Girl Aerynn Arlia. Although Trawn hopes to end corruption with their independent newspaper, the comic spends more time exploring the comedic and dramatic potential of a community evolved from Cyberspace.