Not to be confused with the TV series Bones, "Bones" McCoy of Star Trek, the animation studio BONES, the musical group Bone Thugs-n-Harmony, or the short story from The Further Adventures of Batman. 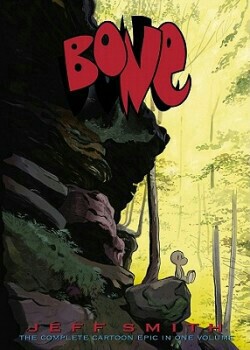 Bone is a lengthy independent comic book series by Jeff Smith that took 13 years to complete, mixing the sensibilities of a joke-of-the-day comic strip like Pogo with the sweeping story of an epic fantasy à la The Lord of the Rings. Jeff self-published the series in its original run, collecting the issues in groups of six or so in nine total volumes, until Image Comics picked it up for a time. A second printing came under Scholastic, Inc., for which Jeff's friend Steve Hamaker colored each and every page. The series eventually won several Eisner Awards and Harvey Awards, and propelled Jeff Smith into immense indie comic book acclaim.

The comic tells the story of three cousins who happen to look like humanoid, bone-shaped Cartoon Creatures. They are exiled from their town called Boneville and become lost in a Magical Land called the Valley, where they meet an energetic old lady (Gran'ma Ben) and her beautiful grand-daughter (Thorn). Together, they're caught up in intrigue, magic, and adventure.

There are also two prequels: Rose, which tells the story of a young Gran'ma Ben, and Stupid Stupid Rat-Tails, a tall tale of how Big Johnson Bone, the founder of Boneville, once visited the valley, fought off the rat creatures and caused them to begin their tradition of cutting off their tails. The Scholastic run packaged Stupid Stupid Rat-Tails with new Big Johnson Bone stories as Tall Tales. Tom Sniegoski, who wrote the original Rat-Tails and the new Tall Tales stories, also wrote a novel trilogy called Quest For The Spark that features a Ragtag Bunch of Misfits coming together to fight a new threat. Additionally, as a 25th Anniversary Milestone Celebration, Jeff Smith put out a short epilogue book simply titled Bone: Coda.

An Animated Adaptation has been in Development Hell for quite some time. In the 1990s, Nickelodeon Movies, having just released the hit film The Rugrats Movie, had an alarmingly misguided vision of what they wanted it to be, and Jeff was the one who bailed out of the deal. The rights were then held by Warner Bros., and the reports on the production team

were that Animal Logic, the studio behind Happy Feet and The Matrix, would animate, P.J. Hogan (My Best Friend's Wedding, Confessions of a Shopaholic, the 2003 live-action Peter Pan) would direct, and it would be adapted for the screen by Patrick Sean Smith (ABC Family's Greek). In 2016

Jeff was initially fighting for traditional 2D animation, since he used to run his own animation studio called Character Builders that contributed to films like Space Jam, and was the studio that was originally slated to animate the film. According to the interview above, Jeff is fine with the change because the outcome of the movie is not in his control, even though he will have executive-producing credit. He STILL remembers his original preference, though,

and fans continue to prove this.

However, it was not to be. After several years with little progress made (and no release date appearing on Warner Bros.' slate of upcoming animated movies) the rights to adapt the comic went up for sale again. In 2019,

Netflix secured the rights to the franchise with plans to adapt the comic into an animated series. Unfortunately, layoffs from Netflix in 2022

led to the series being cancelled.

The first two story arcs (out of nine) were also adapted into an Adventure Game series by Telltale Games in 2005 and 2006.

All nine volumes have been collected in a single One Volume Edition (black-and-white 2004, color 2011).

Quest for the Spark Prose Trilogy