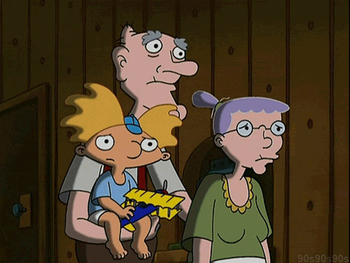 A character, generally the main character and a child or minor in age, is shown to have missing, dead or otherwise absent parents. Because there is still the need for an adult figure around, the character's grandparents fill in the void. Generally, there are no aunts or uncles in the picture. If there are, that's Nephewism.

The child may feature as a Heartwarming Orphan. When using this trope would interfere with the plot, you often get a World of No Grandparents.

This happens in real life as well. Family Relationship Switcheroo commonly involves a cover-up of this situation, when the child is raised by grandparents but is made to believe them to be their real parents, in order to avoid admitting that their "sibling"-but-really-parent conceived them outside wedlock.