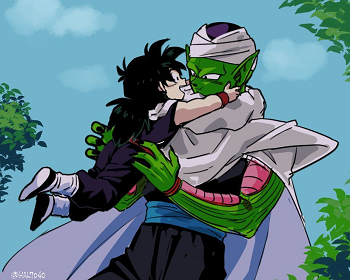 For when your actual dad's too busy training. Or being dead. Or both.
Art by Hal7040

"Watching John with the machine, it was suddenly so clear. The Terminator would never stop. It would never leave him, and it would never hurt him, never shout at him, or get drunk and hit him, or say it was too busy to spend time with him. It would always be there. And it would die to protect him. Of all the would-be fathers who came and went over the years, this thing, this machine, was the only one who measured up. In an insane world, it was the sanest choice."
— Sarah Connor, Terminator 2: Judgment Day
Advertisement:

An amazingly large number of children in the media suffer from Parental Abandonment. Other children are "lucky enough" to have both parents, but unfortunately live in worlds where there are no Happily Married families. For most such children, life is an endless series of disappointments and let-downs. A lucky few, though, manage to find a Parental Substitute.

A Parental Substitute is an adult friend who fills the children's lonely life with guidance and (often) love. They guide the child and teach them how to stand on their own feet, how to have fun, and how to not be so bothered by the fact that Mommy or Daddy are never around (or ignore them). If the parents in question are dead, they may have known them and are able to answer when the child says Tell Me About My Father!. They often tell the kid they are So Proud of You. Usually, by the end of the story, the Parental Substitute leaves as well, but at that point the kid is able to stand on their own two feet.

This trope is often a feature of Tear Jerkers, especially if it follows Take Care of the Kids. If it's an older sibling who's taken over the parental role, that's Promotion to Parent. The Old Retainer may take over this role in event that his employer's children are suffering from Parental Abandonment. If an entire society has teens become parental substitutes, that's a Teenage Wasteland. If the child gets into a big argument with the substitute, expect to hear "You're Not My Father" by the time things get really heated.

Imaginary Friend is often involved. If the Parental Substitute decides to make their status official, as it were, the kid becomes Happily Adopted.

Compare and closely related to Promotion to Parent (when it's a sibling), Honorary Uncle, Nephewism, and Adoptive Peer Parent (for non-relatives), Like a Son to Me, Team Mom, and Team Dad.

Scary Godmother is very motherly towards Hannah, and the latter shows no doubt that she loves her godmother very much.

Scary Godmother is very motherly towards Hannah, and the latter shows no doubt that she loves her godmother very much.