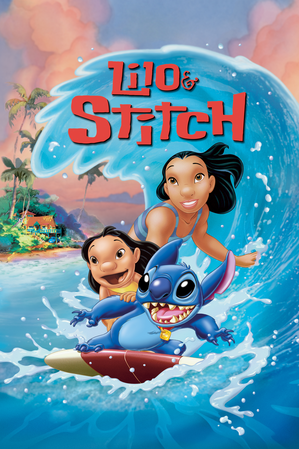 ♫ Let's get jumpin', surf's up and pumpin'
Coastin' with the motion of the ocean ♫
"ʻOhana means family. Family means nobody gets left behind — or forgotten."
—The Pelekais' family motto
Advertisement:

Entry #42 in the Disney Animated Canon, Lilo & Stitch is a 2002 traditionally-animated sci-fi comedy-drama film. It was both critically and commercially acclaimed, a rarity for Disney's animated films during their "Experimental Era" after the Disney Renaissance.

Set mainly in the lush Hawaiian island of Kauai, sisters Nani (voiced by Tia Carrere) and Lilo Pelekai (Daveigh Chase), recent orphans of a car accident, are practically alone in the world except for each other. Lilo, often lost in her own world, neither understands nor is understood by her hula classmates. Nani loves her little sister, but the stress of responsibility makes her a bit short-tempered and resentful.

Unbeknownst to them, Dr. Jumba Jookiba (David Ogden Stiers), the maddest scientist to splice genetics this side of the Milky Way, stands trial for illegally engineering a new life form (actually 626 life forms, but it is his latest that we're concerned with). Experiment 626 ("six-two-six") has a vast capacity for knowledge, spectacular combat abilities, and a programmed instinct to destroy anything he comes across.

Escaping from the United Galactic Federation, 626 takes a shortcut to the closest planet, which is 70% water (important because he is too dense to swim or float) — and miraculously lands on the bitty Hawaiian archipelago in the middle of the Pacific, crashing on the island of Kauai. He adopts Lilo as readily as Lilo adopts him. However, while Lilo wants a companion, Stitch, as she named the alien, wants a human shield to deter Dr. Jumba, who is hot on his trail with the help of the neurotic Agent Pleakley (Kevin McDonald). Stitch inadvertently learns the meaning of ʻohana: "ʻOhana means family. Family means nobody gets left behind — or forgotten." In other words, True Companions.

This movie was a significant breakaway for Disney on many counts, including an unconventional protagonist, crossover "Inter-Stitch-al" trailers, the lack of either romance troubles or a real villain, and the score drawn from home-grown Hawaiian songs and artists — and, of course, Elvis Presley. Unlike other Disney animated films, Disney was hands-off the creative development and did not interfere with the story: director Chris Sanders wanted the film to reflect his own drawing style. He wrote the entire draft along with his directing partner Dean DeBlois and even voiced the protagonist Stitch — a character he originally created back in 1985 for a failed children's book pitch — himself.

Of course, ʻohana did not stop there. The idea of 625 other experiments by Jumba was inevitably too tempting for Disney to ignore, and they quickly developed a franchise out of this film's success. Head to this page to read more about the sequels and spin-offs.

Since its release, Stitch's habit of sneaking into other shows and platforms resulted not just in the movie's teaser trailers, but also in a short cameo in The Lion King 1½, an appearance in the "outtakes" of Brother Bear, four crossover episodes in the second season of Lilo & Stitch: The Series, a role in the Kingdom Hearts video game series, an appearance as a meet-and-greet character in Kinect: Disneyland Adventures, his and Lilo's appearances in Disney Magical World, that game's sequel adding a world based on their universe along with Jumba and Pleakley, and Stitch made into a playable character in the late Disney Infinity series starting with its second game, with that game receiving a "Toy Box Expansion Game" based on Lilo & Stitch with Pleakley making an appearance. In short, Stitch since became (in)famous for being a very crossover friendly character within Disney's works, to the point that throughout 2021 (and early 2022) Disney released a merchandise collection called "Stitch Crashes Disney".

A live-action/CGI adaptation of the film is in works. It will be produced by Dan Lin and Jonathan Eirich, who are also responsible for the 2019 Aladdin remake, and directed by Dean Fleischer Camp (Marcel the Shell with Shoes On). Chris Kekaniokalani Bright is in talks with Disney to write the script. Chris Sanders is expected to reprise his iconic role as the voice of Stitch.

Come see how big this ʻohana is while you're at it.

The YMMV page for this film is over here.

Note: If you were looking for the sequel TV series instead, that would be Lilo & Stitch: The Series. If a trope's page linked you here when it was supposed to refer to the show, then please go back and correct it to link to that pagenote located at WesternAnimation/LiloAndStitchTheSeries instead.

No trope gets left behind or forgotten: 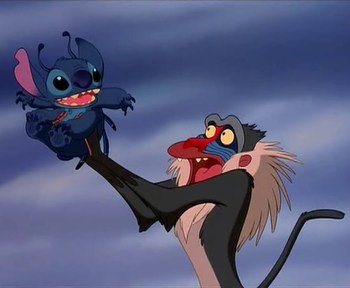 Hey, that's not Simba!
"His name... is Stitch. And he's heading into our galaxy next/this summer."
These four teaser trailers released in the months before the film had Stitch invading the Signature Scenes of the Big Four Disney Renaissance films—Beauty and the Beast, Aladdin, The Little Mermaid (1989) and The Lion King (1994)—before heading into fast-paced montages of scenes from the actual film with AC/DC's "Back in Black" playing in the background.

You can watch all four main trailers in this video

.note The one with a random warthog replacing Timon and Pumbaa is actually in a different trailer

When Stitch blasts into Gantu's cockpit, the captain tries to smash him, declaring him vile, foul, and flawed. Before tossing Gantu out the window, Stitch mentions the BEST part about himself.

When Stitch blasts into Gantu's cockpit, the captain tries to smash him, declaring him vile, foul, and flawed. Before tossing Gantu out the window, Stitch mentions the BEST part about himself.