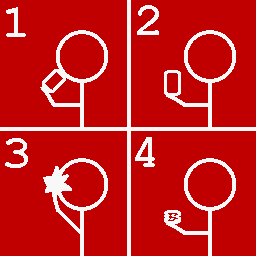 Apply directly to the forehead!
Wilson: Well I decided that being a little bit more like you wouldn't hurt.
[Wilson takes off his hat and crushes a beer can against his forehead]
Tim: How do you feel now?
Wilson: ...I hurt.
— Home Improvement, "Wilson's World"
Advertisement:

Crushing a can of beer or soda with your forehead.

Often starts by a drunken person wanting to show how tough they are, and hey, they just HAPPEN to have an empty beer can in their hand...

Sometimes it's a macho thing, and sometimes it's Played for Laughs. The most frequent variation involves the can being full, with resulting cranial trauma.

In Real Life, this could result in a concussion if you slam the thing against your head (as opposed to placing it there and applying steady pressure). Using a full can is especially not recommended, as these are strong enough for you to stand on them.

It should also be noted that the ability to smash a can against one's forehead is not as impressive of a feat as it used to be, because modern beverage cans are made of thinner aluminum than vintage beverage cans.

Soda Popinski drinks soda from a bottle and then crushes it against his forehead with a laugh.

Soda Popinski drinks soda from a bottle and then crushes it against his forehead with a laugh.