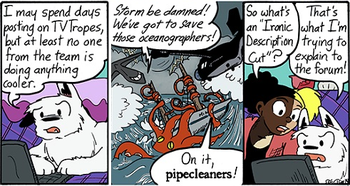 Sweetheart thinks this trope should have "ironic" in its name.
Advertisement:

Alice: Bob must be [description].
Bob: [immediately says or does something contrary to that description]

Different from Ironic Echo Cut in that it doesn't involve an echo. A subset of Hypocritical Humor and, much like it, depends on a Contrived Coincidence. Sometimes, there isn't even a cut involved.

Can be Played for Drama, if the cut is to a sufficiently somber scene.

The inverse of this is I Resemble That Remark!.

This is what happens when you marry an idiot.

A Symbol of Good

This is what happens when you marry an idiot.

A Symbol of Good