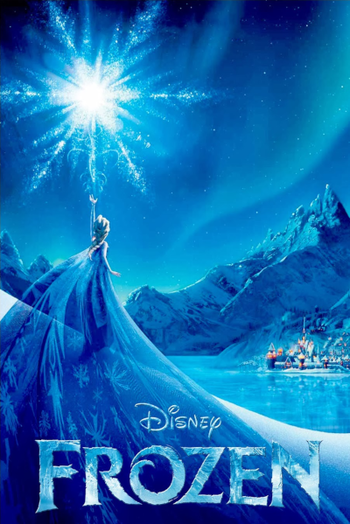 "The cold never bothered me anyway."
"In Arendelle's fair kingdom, a ruler did appear,
Born with a secret power so great, alone she stayed in fear.
Although the force was hidden, one day she let it go,
And all the land was covered in eternal ice and snow..."
— The second North American trailer
Advertisement:

Queen Elsa (Idina Menzel) and Princess Anna (Kristen Bell) are the royal sisters of the pseudo-Scandinavian kingdom of Arendelle. On the day of Elsa's coronation as queen, her Dark Secret is revealed to the world: she uncontrollably conjures up snow and ice from thin air. As Elsa flees to the North Mountain to start a new life alone, she unknowingly unleashes a potentially Endless Winter on the kingdom. Now Princess Anna teams up with rugged mountain man Kristoff (Jonathan Groff), his pet reindeer Sven (who acts like a dog), and singing snowman Olaf (Josh Gad), to track down Elsa, hoping she will return the summer to Arendelle.

It is only the second time they tapped Hans Christian Andersen for a full-length feature (in addition to shorts used for Fantasia), following up The Little Mermaid.

A new Mickey Mouse short entitled Get a Horse! played in front of the main feature.

The film was followed by a short feature, "Frozen Fever" in March 2015 (paired theatrically with Cinderella) and a feature-length sequel with Frozen II in November 2019, both made by the original creative team. It also spawned a a whole franchise of Extended Universe material, including a second short, the Christmas Special known as Olaf's Frozen Adventure in November 2017 (paired with Coco), as well as various books, comics, and video games. A third short, Once Upon a Snowman, serves as an Interquel for this film.

Definitely not to be confused with the drama/thriller hybrid, Frozen (2010).

By sacrificing herself for Elsa's sake, Anna constitutes an "act of true love" and breaks her frozen heart curse.

Example of:
Act of True Love

By sacrificing herself for Elsa's sake, Anna constitutes an "act of true love" and breaks her frozen heart curse.