All Animals Are Dogs 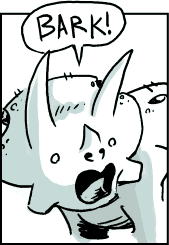 Blue finds a clue.
"It's not an animated movie without a thing that's not a dog acting like a dog."
— Producer, Onward Pitch Meeting

A boy is walking through the woods. Suddenly, he stumbles upon a baby bear! Thinking quickly, the youngster pulls a cookie out of his knapsack and feeds it to the bitty critter. In moments, the bear cub is licking the boy's face, wagging its tail, and fetching sticks.

Of course, in real life, the only animals that act like domesticated dogs are...domesticated dogs, though other canids, particularly if they're Raised by Humans, may exhibit many similar behaviors. The thing about dogs that makes them prime targets for this trope is the same reason dogs and humans get along so well. We share a lot of body language. Dogs are easy to read because they give nonverbal cues we can easily recognize. Other species require you to know how they emote, and you can't expect an audience to be well-versed in, say, how black bears show happiness. Thus, when a fictional animal needs to emote, especially nonverbally, it behaves like a dog — wagging its tail when happy, flattening its ears and slinking away when scolded, etc. The human audience will understand the emotions being expressed and the animal will still have behaved like an animal. Okay, not the right animal, but still better than out-and-out aping human mannerisms, right? Or in the cases of creatures like elephants and dinosaurs, it may simply be the Rule of Funny.

Non-avian dinosaurs are among most common animals to fall to this, as a) nobody really knows their actual mannerisms, and 2) works featuring them tend to be in prehistoric times, before the domestication of the dog, making it possible to pass them off as the setting's equivalent of a dog. Alien animals are also prone to this trope, for much the same reason.

Canines, particularly wolves (of which dogs are a subspecies), have a number of traits that made them amenable to domestication:

Modern dogs have tens of thousands of generations of selective breeding for puppy-like behavior, friendliness, and obedience to humans. Most other animals do not have all these things and thus, in Real Life, they have no reason to think or act like dogs.

This trope may be understandable when applied other canids, as domestic and exotic pet foxes (most commonly Fennec and red note Silver and cross foxes are red foxes. ones) and many other exotic pet canids in real life can seem pretty doglike, but with regards to other animals, including common pet ones, not so much. The cat and the rat can be as friendly and loyal as the dog, but they behave very differently.

This trope may be why many cartoon animals, especially those in the Inkblot Cartoon Style, are drawn with roughly doglike noses, even if the species doesn't have this trait in real life. This is justified in bears (pandas noses are triangular though), raccoons, badgers, and red pandas as those animals have a similar nose shape and color (black) to canids in real life. This is most egregious in rabbits/hares, reindeer (largely due to White-Tailed Reindeer), monkeys, and apes, whose noses don't remotely have this shape.

Related to the idea that all birds and other flying animals (such as pterosaurs, but barring bats and flying insects), whatever their species, will act like domestic species such as chickens or budgies. Other variations of this phenomenon include all pet rodents, including most egregiously guinea pigs, being like hamsters or mice, all snakes acting like rattlesnakes or cobras, penguins acting like ducks, all (at least all truly wild) equids acting like domestic horses, and reindeer looking and acting like white-tailed deer. As far as mythical animals go, dragons are often portrayed as acting like cats. Also related to werewolves being like dogs, though different because werewolves are fictional half-human, half-wolf hybrids and not animals, as well as behaving like dogs for different reasons (because writers have more experience with dogs than wolves).

Subtrope of All Animals Are Domesticated, which is about the feasibility of wild animals being kept as pets at all. Often overlaps with Fantastic Fauna Counterpart, if the animal showing dog-like behaviour is actually the setting's counterpart to dogs. Domesticated Dinosaurs is often a subtrope, though not necessarily. Compare Canine Confusion.

If the animal character in question literally has dog-like parts in addition to their dog-like behavior, then it belongs to Mix-and-Match Critters, not this trope.