Western Animation / The Land Before Time

"All that remained of his herd was his mother, grandmother and his grandfather. He knew them by sight, by scent, and by their love."
— Narrator 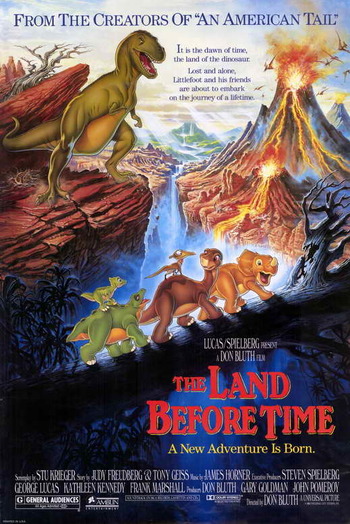 "A new adventure is born..."
Advertisement:

The Land Before Time is a 1988 animated film directed by Don Bluth, and his second collaboration with executive producer Steven Spielberg (following An American Tail). George Lucas was also one of the executive producers.note Interestingly, this is the only project Spielberg and Lucas have officially worked on together outside of the Indiana Jones series.

In the original film, a group of dinosaurs leave their disasters-stricken home lands for the Great Valley, a place of promise and opportunity. Along the way, a young brontosaurus ("Long Neck") named Littlefoot becomes separated from his group and watches his mother die to protect him from a Tyrannosaurus Rex ("Sharptooth"). Littlefoot meets up with other young dinosaurs of different species as they try to get back to their families.

The first film, made at the dawn of The Renaissance Age of Animation, is well remembered for its excellent character animation (a hallmark of Don Bluth films), surprisingly complex plotting, and groundbreaking soundtrack by James Horner. It was also the first major dinosaur film made after the Dinosaur Renaissance reached popular culture, and features the refined image of dinosaurs since then (see Shown Their Work below).

The film released its first sequel in 1994, and Universal Cartoon Studios ended up making a sequel almost every year up to 2007, for a grand total of twelve. These sequels took a much Lighter and Softer tone than the original film, a move that alienated them from many of the first movie's fans. Still, others embrace these sequels into the canon of the series and see them as enjoyable, harmless, and frequently heartwarming kids' films that contain unexpectedly deep, complex themes and moral lessons. The series also had a short-running TV show in 2008 that lasted for one season. When this show ended, the series seemed to be headed towards a hard-earned retirement.

Or was it? After almost nine years since the last one, a fourteenth movie was finally released on February 2nd, 2016.

Example of:
Please Wake Up