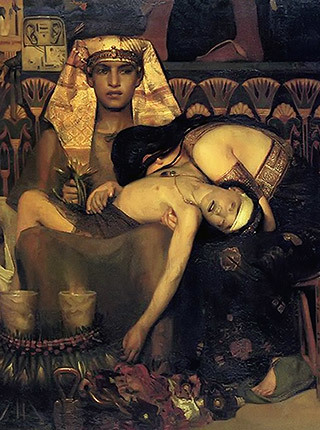 Death of the Pharaoh's First Born Son by Lawrence Alma-Tadema
"No parent should have to bury their child."
— King Théoden, The Lord of the Rings: The Two Towers

Parents’ worst Adult Fear is realized: they have outlived their children. Whether it is from disease, murder, war, an accident, etc., their children are all dead and buried. At this point, the parents can fall into a deep depression or seek Revenge on whoever caused this situation. If they are lucky, they will have their spouse to help them through this situation but often they will be all alone to deal with their grief.

An even worse version of this trope can occur if the parents are immortal or The Ageless and cannot pass their immortality onto their offspring (provided they can actually have children). While they may have several generations of children, grandchildren, etc. they will be cursed with knowing they will outlive them all. This may cause them to choose not to have children to avoid this pain. A Supernaturally Young Parent can easily be accompanied by this trope.

Very much Truth in Television. This can happen if someone dies an unnatural death (such as in an accident or due to disease) or if a parent lives particularly long (it's quite common for people over 100 to have outlived at least one of the parent’s children) and far too frequently during times of war when the offspring is old enough to fight and in earlier historical periods when death at early or middle age was more common than it was today, those who lived to advanced age (their 80s or 90s) were likely to have outlived some of their children or even grandchildren. However, unlike in fiction, in real life, it is accepted as a fact of life, no matter how depressing the situation is.

If the deceased offspring leaves behind a child of their own, it often leads to said child being Raised by Grandparents.

The invocation of this trope is Offing the Offspring, where the parents deliberately outlive their offspring by killing them.