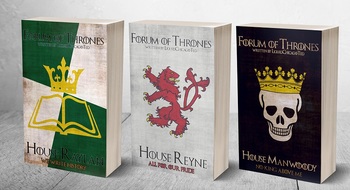 A long read awaits...note  From left to right, the three house sigils that are used as the 'covers' for the books. On the left, House Raylan for Book 1, followed by House Reyne for Book 2, finally House Manwoody for Book 3.
Advertisement:

Forum of Thrones by LiquidChicagoTed is an ongoing Elsewhere Fic set in the world of A Song of Ice and Fire/Game of Thrones. It takes place roughly 300 years before the main events of the novels and the series, during the period that would later be known as The War of Conquest. Starting shortly before the beginning of the war, the initial main setting of the story deals primarily with a Succession Crisis in the city of Raylansfair in the Kingdom of the Reach, where Lord Robert Raylan, the last of his line, dies without naming an heir, leaving the rich and strategically important city to be preyed upon by several interested parties, each with their own distinct motives and personalities. That said, the narrative eventually expands to feature locations across all of Westeros and beyond, telling a story of epic scales through the eyes of over two dozen Point-Of-View characters, as one of the most important moments of Westerosi history unfolds before their eyes.

One thing that makes this Fic stand out compared to others of its kind is its interactivity and how heavily reader input can change its course. After almost every part, the author offers a number of options on how the Point-Of-View character is supposed to deal with a situation and the readers are allowed to give their vote for their favoured option, similar to a Gamebook-story. The option that gets the most votes determines how the character is going to act in their next part and their actions in turn affect the characters around them. These choices can have a drastic effect on how the story continues. Another key feature of the story is that it allows the readers to create their own characters, which will eventually appear at some point in the story. Over the time, a huge and diverse cast has been created by dozens of readers and many of these characters take a central role in the story.

This fanfiction gets it slightly unusual name due to its origin. Written on the Telltale forums, alongside several other fanfictions set in the worlds of the more recent Telltale games, Forum of Thrones was the first of its kind that appeared in the Game of Thrones subsection of the forums, therefore taking up on the mantle of Forum of Thrones. Starting in late December 2014, it consisted of over a thousand pages about two years later and it is still far from finished, with roughly one third of the planned material having been written so far. It is noted to be very active, with long updates several times a week.

Originally, the story could be read on the Telltale Forums

, but when the Game of Thrones section of the forums got closed down a few months after Telltale's bankruptcy, the author moved the story to Creator's Haven

, an original forum dedicated to Interactive Fanfiction, where it is also primarily updated and where the author mostly interacts with the readers. New parts appear there first and it is also the place where readers can vote on how the story is supposed to continue. However, the chapters are also available on Google Docs

At precisely 1,117,256 words for Book 1 alone, it furthermore qualifies as a Doorstopper.