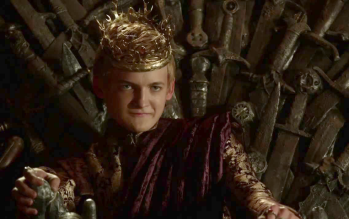 "The King can do as he likes!"
"You, sir, are the most uncharming prince I have ever met! In fact, the only thing royal about you is that you are a royal pain!"
— Rarity (to Prince Blueblood), My Little Pony: Friendship Is Magic
Advertisement:

In which great power and low wisdom are combined in a typically Jerkass package. A royal brat is often, but not necessarily always, young, but he has always been raised in a life of luxury and power. His most prominent features are arrogance, pettiness, and a sense of entitlement. His every whim is catered to, his servants and courtiers live in fear of his temper, and he has no notion what life is like for those less fortunate than him, and doesn't care. His word is worthless, and he's very prone to be fat. A Sub-Trope of It's All About Me.

He does not have to be royal or even blue-blooded — fat businessmen and spoiled rich kids fit the trope as well.

Many evil rulers are like this, and through their petty cruelty drive the heroes to overthrow them. On occasion, they will have a Prince and Pauper adventure or in some other way be confronted with the horrible lives the ordinary population leads; in this case, they will mend their ways. This is more likely the younger they are; young Royal Brats are often the victims of Parental Abandonment or a blind Doting Parent (who has often caused Rich Boredom) and can straighten out if provided with love and discipline. Many a Magical Nanny specializes in it. Older versions who appear in Fairy Tales are prone to Dude, Where's My Respect?, which has a tendency to backfire, badly.

This trope should not be confused with The Caligula, though sometimes they can overlap. Caligulae are insane; these brats are just insensitive. Some child rulers are less immature.

Evil Chancellors and the more malevolent breed of Chessmaster absolutely love the Royal Brat, because manipulating him is, well, child's play. In many cases, they will go so far as to murder the present incumbent so as to get a suitably vile, malleable little tyke on the throne. However... Evil Is Not a Toy may ensue if they fluff their selection procedure up even slightly.

Not to be confused with Well, Excuse Me, Princess!, though they can overlap. Highly prone to be subjected to a Break the Haughty moment. Should the Royal Brat's obnoxiousness, entitlement and tantrums grow too wearying on their royal parents and/or subjects, then he or she may find him or herself in the unpleasant position of being The Wrongful Heir to the Throne, or at least viewed as an Inadequate Inheritor.

One of The Oldest Ones in the Book. The king who thinks nothing of imposing the Engagement Challenge or the Impossible Task, and reacting to success with Dude, Where's My Respect?, is a staple of legend and Fairy Tale (and often old enough to have a grown daughter).

A Sub-Trope of Spoiled Brat and Idle Rich.

Compare Prince Charmless. Contrast A Child Shall Lead Them, who is usually the monarch; on the other hand, he may be encouraged to be a Royal Brat by the Evil Chancellor. Contrast Spoiled Sweet, Lonely Rich Kid. See also Aristocrats Are Evil.

He ain't no Prince Charming, that's for sure.

He ain't no Prince Charming, that's for sure.