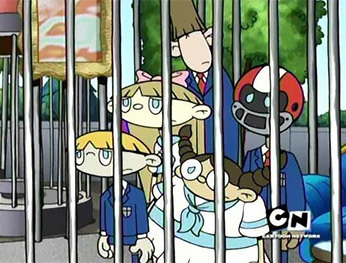 Pictured: the "Delightfully Charming Children" exhibit.
So if you come visit, just howl, honk, or moo
And try to pretend you're an animal, too.
'Cause if you're a person, they'll throw you into
Cage Two of the zoo here in Animaloo.
— Shel Silverstein, "The People Zoo"
Advertisement:

Exactly What It Says on the Tin, a zoo created by some alien race or just a plain crazy person that puts live specimens of humans or other intelligent life on display. This is one of the more likely places you'll go if the Egomaniac Hunter doesn't kill you after Hunting the Most Dangerous Game.

Could be called the slightly more civil version of People Farms. Super-Trope of Human Pet. If it's humans exhibiting unusual specimens of their own species, then that's The Freakshow (though the "exhibits" in a circus sideshow may in fact be there of their own volition, simply because it's the only way they can make a living among All of the Other Reindeer). See also Living Museum Exhibit.