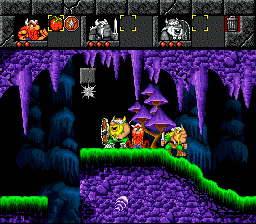 Erik: If I bash one more wall right now, my head will explode!
Olaf: I got dibs on his helmet.
Baleog: Okay, but I get his boots.
Erik: It's great to have such good friends.
Advertisement:

In a frozen village in the far north, three Vikings of great skill and strength live quiet lives, spending their days hunting for meat in the surrounding woods. They are Erik the Swift, known far and wide for his great speed and incredible jumping ability; Baleog the Fierce, whose skill with a bow and sword allows him to crush anything in his path; and Olaf the Stout, who carries a shield and is strong enough to carry a full-grown man on top of it.

Life is good and they hope they don't ever have to leave their village.

One cold night, the trio finds themselves kidnapped by an evil green alien known as Tomator, who wants to use the Vikings as exhibits in his intergalactic freak show. The trio aren't about to take this lying down and immediately bust out. Their escape attempt goes a bit awry, however, resulting in them being hurled through time. It's up to you to lead them home.

The Lost Vikings, a 1992 game developed by Silicon & Synapse (the team that would later become Blizzard Entertainment), is a hard game to classify. At first glance it looks like a simple platformer, but it's more complicated than that — two of your characters can't even jump. Puzzles are definitely a big part of the gameplay, but it's not entirely cerebral — in later levels it's a challenge just to stay alive. It's more accurately called a "puzzle-platformer", as the goal is to lead all three Vikings (who you can switch between at any time) safely through each level to the exit. Each character has his own set of abilities which he can use to help the team progress through the level: Erik can jump to higher ledges and use his helmet to bash through fragile walls; Baleog can use his weapons to defeat enemies and flip switches; and Olaf can use his shield to block enemy attacks and as a hang glider to slowly drop to lower levels.

The big draw to the series is how each character's abilities are used in unique ways and in combination with each other to allow for safe progress. For example, one early puzzle requires Olaf to use his shield as a platform for Erik to jump from, giving him the extra height he needs to vault a locked gate. On the other side, Erik can find a key to unlock the door and allow his companions to progress. Some of the puzzles are quite devious, and the game is ruled by Trial-and-Error Gameplay. Lots of it. Lots of it.

In addition, the game has a quirky sense of humor of the type rarely seen in this era of video games (which were usually lucky to get any text at all). It's an absolute joy to guide the bumbling, bickering Vikings through each stage.

In 1997, a long-awaited sequel was finally released (initially for the SNES and later remade for the Playstation, Saturn and PC, alternately titled Norse by Norsewest: The Return of the Lost Vikings). In this game, the Vikings are again ambushed by Tomator, but the Vikings respond by mugging Tomator's minions and taking their gear, giving them new abilities. Erik gains rocket boots (which allow him to Double Jump) and a scuba helmet (which removes his Super Drowning Skills); Baleog takes a lightsaber and a bionic arm (which allow him to attack in eight directions, Belmont-style, and swing off certain gems), and Olaf earns a new cybernetic shield which allows him to shrink and boosts his flatulence to frightening levels. On top of that, the Vikings pick up two new characters in their travels: Fang the werewolf, who can run, jump, attack enemies, and Wall Jump (and comically be mistaken for every furry animal under the sun but a wolf); and Scorch the magic dragon (who has never seen the sea, but would evidently like to check it out), who can fly and breathe fire. To keep the gameplay simple, however, the two newbies would replace one or more of the Vikings every so often, allowing the player to control no more than three characters at a time. The packaging is different, but the game's the same — use the Vikings' abilities to lead them safely through stages full of death traps until you got to Tomator.

Fun and funny, but surprisingly deep; well worth a try.

◊ a Shout-Out or two to Blizzard's more famous series, Warcraft, which later returned the favor. Eventually, the trio made a comeback by being playable in Heroes of the Storm.

Not to be confused with the Starcraft II Mini-Game "Lost Viking", nor the Dethklok song of the same name.