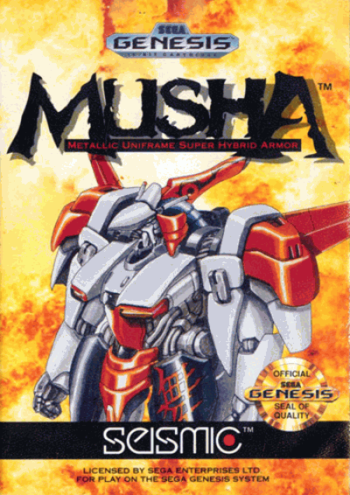 M.U.S.H.A. (known as Musha Aleste in Japan) is a vertically scrolling shoot 'em up by Compile and was released in 1990, as part of their Aleste series. It was released on the Genesis/Mega Drive in the US and Japan, but not Europe. It has a Spiritual Successor on the Sega CD, Robo Aleste. It was later rereleased in 2021 as part of the Nintendo Switch Online subscription service, requiring an Expansion Pack subscription upgrade along with the other Sega Genesis titles.

M.U.S.H.A. is known for being pretty easy as far as shmups go and is a lot of fun. It's kind of a rarity now, and is a popular import title in Europe.