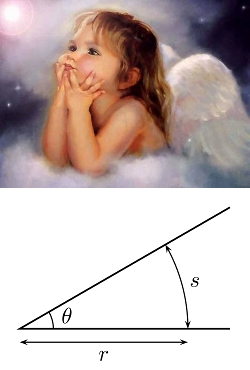 Top: A cute angel.
Bottom: Acute angle.
If you can't tell the difference, you're being obtuse. note Right? Glad we got that straight.
"Y-O-U-R,
Y-O-U-Apostrophe-R-E,
They're as different as night and day.
Don't you think that night and day are different?
What's wrong with you?"
— Strong Bad, Strong Bad Email #89 "local news" (in the Easter Egg)
Advertisement:

Some writers are infamously inclined to either not use a spellchecker at all (producing mistakes such as the numerous claims of "misspellings" on this page), or trust them blindly.

This leads to several problems.

If the mistyped word happens to be a legitimate word itself, the spell checker will let it go without mention. This leads to errors like those in this trope's name: rogue/rouge, angels/angles, and Satan/satin. While most word processing programs also have grammar checkers, following their rules blindly is the sort of thing up with which your readers may not put, so many either don't use the feature or don't trust its suggestions.

On the other hand, a mistyped word, proper noun, or even valid English word that isn't part of the dictionary (for whatever reason) can get "corrected" to something utterly preposterous, especially if the spell checker is set to "autocorrect". This variant used to sometimes be called the Cupertino Effect after numerous instances of "cooperation" being replaced by "Cupertino" in documents by early spellcheckers because they didn't recognize "cooperation" (even though they did recognize "co-operation"), with "Cupertino" being the closest match they could find in their dictionaries.Trivia "Cupertino", an otherwise unremarkable small town in California, was in these spellcheckers' dictionaries because Apple Computer happens to be headquartered there. The link with "cooperation" was the misspelling "coopertino". Nowadays the proliferation of touchscreen devices has made such Auto-Incorrect issues much more common.

A third variant, the Scunthorpe Problem, also known as the clbuttic mistake, is a variant where words are "misspelled" because a filter saw a string it construed as rude within a legit word and autocorrected it. These are usually easy to spot, though, because everyone knows "consbreastution"note constitution; the letters "tit" in "constitution are "censored" to "breast" and "buttbuttination"note assassination; the letters "ass" in assassination are "censored" to "butt" aren't real words. Some forums still won't allow you to snigger, or call someone niggardly

if the filter's bad enough.

So, this is when the spellchecker ceases to be a fiendnote friend and may even become actively an enema.note enemy

It's unfortunately becoming more common even in professionally published works, with the increasing dependence on the computer spellchecker and the decline in the number of proofreaders working for publishing houses. It can also be a big problem for people trying to translate into another language without a proofreader.

If the words are correct, but the punctuation, grammar, or other usage is just wrong, that's Wanton Cruelty to the Common Comma. Compare with Spell My Name with an "S", where confusion occurs because nobody can agree on how a name is spelled (this is Truth in Television; the Associated Press estimated there were more than 150 different ways the name of the former ruler of Libya, Moammar (or Mohamar) Ghadaffi, Quadaffy, (or Kadafy), etc. could have been transliterated into English). When this is done by a character in a work of fiction (or just by someone sending fanmail), expect them to receive a Grammar Correction Gag in response. See Malaproper for someone who does this with the spoken word. If this is done intentionally, either to make a character's name seem more unique or to capitalize on a percieved coolness in that spelling, it's Xtreme Kool Letterz. See also Eats, Shoots & Leaves.

For a somewhat larger, somewhat snarky, list, see The Big List of Booboos and Blunders. Also compare Wanton Cruelty to the Common Comma (for sloppy use of punctuation) and How Do I Used Tense? (for ungrammatical phrasing).

Naturally, this page is a magnatenote magnet for puns, as seen in the page image's caption.

Not to be confused with actual Rogue Angels of Satan, even if they really are wearing Rouge, Angles, or indeed Satin.

Also, please try to avoid sounding like a rude Grammar Nazi when adding examples. Even literal ones

open/close all folders
Commonly Misspelled Homophones
Rogue/Rouge
"Rouge" is the French word for "Red". In English, it designates a reddish (or pinkish) cosmetic used to make one's cheeks redder.
"Rogue" means a stealthy/deceitful or renegade person. Which is why it's the name for the basic thief class in Dungeons & Dragons. 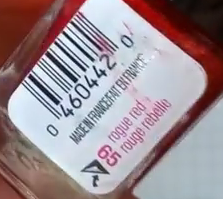 She then remarks, "That's fun to say even if I DON'T understand it."