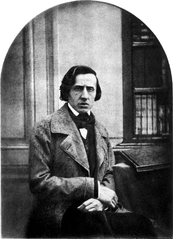 Fryderyk Franciszek Chopin note pronounced as "show-pan" or "show-pun" (or, if you want to get really technical, "show-PAH~(n)") and no, it doesn't rhyme with "choppin'" or "shoppin'", also known by the French version of his name, Frédéric François Chopin (his father was French-born) (1 March 1810 – 17 October 1849) was a Polish composer from the Romantic Era of Classical Music.

Born in 1810 in Poland, he wrote almost exclusively for the piano, and his works are well-known for both their lyrical content and technical demands. When Russia invaded Poland, he left his home country, never to see it again. He nevertheless kept his national spirit through his writing of some of the best-known mazurkas and polonaises.

He had an affair with writer George Sand at some point, before dying unfortunately young in 1849 of tuberculosis.

Some of his more famous works include: