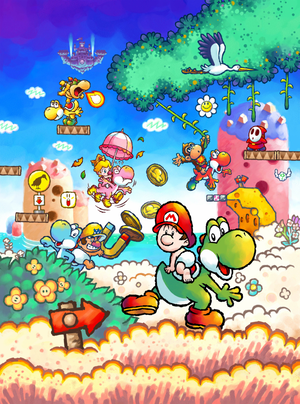 Taking place after the original game, Kamek kidnaps all of the babies in the Mushroom Kingdom to take them to Bowser's Castle. Thankfully, the Stork attacks the Toadies and force them to drop two, who are revealed to be Mario and Princess Peach. The two babies land on Yoshi's Island and Yoshi and his friends decide to help Mario once again by rescuing all the babies.

Gameplay remains largely the same as the original Yoshi's Island, but has quite a bit more added features. In addition to the original Mario, there are several other babies that give Yoshis added abilities. Mario himself allows the Yoshis to run fast and see red M blocks. Peach allows the Yoshis to Flutter Jump higher and ride air currents. Baby Donkey Kong can climb vines and chains. Wario has a magnet that attracts coins and other magnetic objects. Finally, Baby Bowser can breathe fire, though at the cost of the Yoshis not being able to make eggs. The levels start out fairly easy, but later on become very hard.