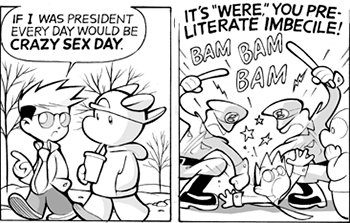 "Sorry, I was confused by your double negative. You see, grammar is very important to the Nazi Party."
— Col. Hans Landa, CollegeHumor parody

On wikis, Grammar Nazis sometimes leave snarky little notes in discussion areas about the correct use of italics or where the apostrophe goes in "its/it's." They don't add any new content — except possibly passive-aggressive "help" articles on proper usage of the semicolon. At their worst, they are known for insisting on "rules of English" which are derived from French and other Latin-descended languages and were invented for the sole purpose of annoying English-speakers. They'll also likely become a Serial Tweaker, careful to quickly correct their own mistakes. (We hope.)

A Spelling Nazi is a subtype of Grammar Nazi, specializing in spelling. A Spelling Nazi would actively fight the Rouge Angles of Satin. A Spelling Nazi would make sure that "definately" was written by "definitely" and not "defiantly." A Spelling Nazi would always spell the names of the characters, settings, attacks, and MacGuffins in its fandom correctly if the correct spellings are known (and if they aren't, then expect those of different ideologies to try to tear one another's throats out over which is more "correct"). And God save us all if a British Spelling Nazi ever meets an American one.

— or grandma Nazis. If Godwin's Law becomes an issue, "Grammar Police" is another accepted term, and since Spain didn't know about the Nazis our Spanish-language page on this trope is called Talibán Ortográfico, or "Grammar Taliban".

Compare Grammar Correction Gag. See Artistic License – Linguistics, The Big List of Booboos and Blunders, Rouge Angles of Satin, Wanton Cruelty to the Common Comma, and Tenses for errors that are likely to invoke Grammar Nazis' wrath. If you want to make a Grammar Nazi upset, add an Acquired Error at the Printer to something they wrote. If there's an error everyone can see, it may be a Tyop on the Cover. The Grammar Nazi is the sworn enemy of the Malaproper. May overlap with Caustic Critic and Accentuate the Negative. Usually a form of Single-Issue Wonk.

Note: If you feel the urge to correct grammar on This Very Wiki, the preferred approach is Repair, Don't Respond. After all, we all make mistakes sometimes, and nobody wants to look like an asshat.