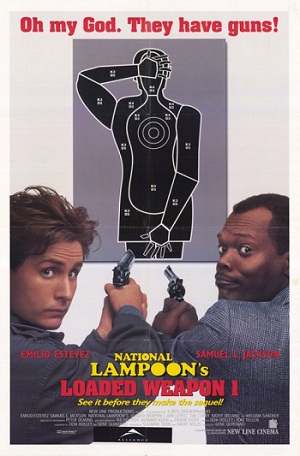 Loaded Weapon 1 is a 1993 spoof movie released under the National Lampoon banner. It was directed by Gene Quintano, whom you may remember for writing a few of the Police Academy sequels.

Emilio Estevez and Samuel L. Jackson star as Detectives Colt and Luger in a direct parody of the Lethal Weapon movies and buddy cop film tropes (Odd Couple, Salt and Pepper, Police Procedural, etc.). The two cops — Colt is unhinged after recently losing a loved one, while Luger is a stable family man — are teamed up to investigate how and why Wilderness Girl Cookies are being laced with cocaine. Other films that provide grist for the comedy mill here include The Silence of the Lambs and Basic Instinct, while Kathy Ireland, William Shatner, Tim Curry and Jon Lovitz round out the supporting cast.

And no, there is no sequel in case you were wondering.

Just one of the many tropes this film parodies

Just one of the many tropes this film parodies