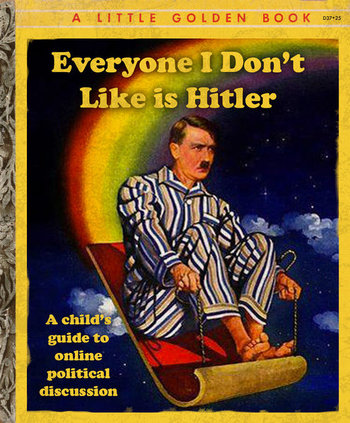 "Assuming everyone is a Nazi? Who are you, Hitler?!"
"The word fascism has now no meaning except in so far as it signifies 'something not desirable.'"
— George Orwell, "Politics and the English Language", 1946
Advertisement:

Godwin's Law, also known as "Godwin's Rule of Nazi Analogies," is an "Internet law" describing the tendency of people on the Internet to say outrageous things to win arguments. Originated by Richard Sexton, it's named after Mike Godwin, longtime attorney for the Electronic Frontier Foundation (and at one time for the Wikimedia Foundation as well), who popularized the law in 1990 in this form:

As an online discussion grows longer, the probability of a comparison involving Nazis or Hitler approaches one.

Godwin based this on his observation of behavior on Usenet. Net.Legends FAQ

Any off-topic mention of Hitler or Nazis will cause the thread it is mentioned in to come to an irrelevant and off-topic end very soon; every thread on Usenet has a constantly-increasing probability to contain such a mention.
Advertisement:

In the end, it's a simple observation, by now generally accepted across the Internet: whoever is the first to play the "Hitler card" has lost not only the argument, but whatever trace of respect they may have had. If you have to resort to comparing your adversary to the most infamous mass-murdering dictator in history, that generally means you've run out of better arguments. Thus, once such a comparison is made, the thread can be presumed finished. The original "Godwin's Law" only spoke of Internet users' tendency to make frivolous Nazi comparisons, but the utter failure of those comparisons to work is now also enshrined in "Internet law".

Note that there's an important distinction — the comparison to Nazis must be frivolous. The law is not supposed to apply to serious discussions of Nazi Germany or its policies

on the Internet; Mike Godwin has long lamented frivolous invocation of his "law" to stifle such discussion, and has also lamented having to even clarify this aspect of the law. This led to the creation of a corollary known as "Henderson's Law", an observation by Joel Henderson that the Internet's awareness of the law has resulted in its invocation at any comparison to Hitler or Nazis, no matter how accurate or on-point.

The Internet being a place where no one is allowed to concede an argument, users have tried to find various workarounds where they can use their desperate rhetorical devices without violating Godwin's Law. They've tried:

But the Internet being what it is, invocation of Godwin's Law isn't always going to end the argument in your favour either:

A real invocation of Godwin's Law is really an accusation of poor debating, as it amounts to accusing your opponent of comparing you to an atrocity so evil as to be non-debatable, which is not only very rarely a fair comparison, but also is very insensitive to real-life victims and their descendants. Usually, it's seen as an act of desperation, in the sense that you've run out of better arguments, but for some people, it reflects a sincere belief (for instance, theists often claim that all morality comes from religion, so if you don't believe in God there's nothing stopping you from being as bad as Hitler — even though whether Hitler himself was really an atheist is a complicated question).

The trope has been around even before the Nazis took power albeit taking a different form. Prior to World War II, the go-to villains were generally Biblical, such as the Nepharious Pharaoh (often thought to be Ramses II) from the Book of Exodus, and Pontius Pilate and Judas Iscariot from The Four Gospels. Attila the Hun was also often used, leading to the appellation of the Germans as "Huns" during World War I for their supposed savagery. But it shifted to Hitler almost as soon as the Nazis had been defeated; George Orwell observed the phenomenon as early as 1946 in his essay "Politics and the English Language

to refer to it in 1953. Mike Godwin just observed how it went down on the Internet.

See also Demonization (the broad rhetorical device) and Abomination Accusation Attack. Not to be confused with Godwin's Law of Time Travel, which has to do with Hitler's ability to win World War II because you went back in time, regardless of whether anything you did had anything to do with Hitler.

An escalating argument with the Klingons literally ends with Kirk referencing Hitler.

An escalating argument with the Klingons literally ends with Kirk referencing Hitler.