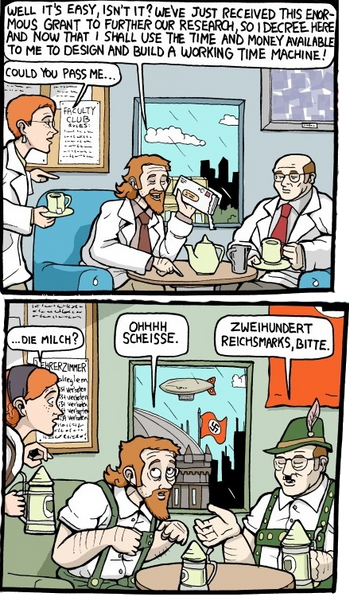 "Die Zeitmaschine ist eine Katastrophe."Translation "The time machine is a disaster."
"The first rule of time travel is that any and all modifications made to the timeline result in Hitler winning World War II. Run over a hippy in 1968? Hitler wins."
— colonel_green, ScansDaily
Advertisement:

As the amount of time-traveling you do increases, the probability of Hitler winning World War II approaches one.

You return home from your jolly time travel adventure in ancient Greece, having saved the world and being careful not to upset history and.. hold on a moment? Are those swastikas?! Hanging from the White House?! Looks like you've been hit by Godwin's Law of Time Travel.

About the only time travel that doesn't result in a Nazi Victory is traveling to times after WWII (including the future)... unless a neo-Nazi steals your time travel pod to help out Hitler.

The strangest thing about Time Travel is probably that a) the Nazis winning WWII is the most common accidental timeline shift and b) that will usually be the only change in the new timeline. It almost seems like Germany was supposed to win, and that history is trying to snap back to its original form. Perhaps Germany actually won, and a neo-ally traveled back in time to make sure the Allies won by making Hitler depressed or convincing him to declare war on his ostensible ally whose long cold winters had defeated numerous invaders before him.

Interestingly, in reality, a Nazi victory (though depending on how one actually defines "victory") seems to have been quite improbable. The Allies were in reality much more powerful in many ways — including both population and industrial capacity — than the Axis, and Hitler allying with Russia and Japan was always done in the knowledge that sooner or later one would turn on the other (Hitler just wanted to get the first stab in). There was no single, easily changeable factor contributing to the Allied success, and it is likely that many changes to history, perhaps stretching back to the outcome of the previous war or further, would be needed for Germany to have a decent chance of winning. In fact, any possible chance of them winning would have been so precarious that the inverse of the trope would make much more sense - that any time tampering starting with a timeline where the Axis won would lead to a world where they didn't. Even if they won, if you are Continentalist-historian then you'll argue that Hitler never plotted to Take Over the World and just wanted to re-establish a German superstate dominating Europe, so the United States and many other non-European countries probably wouldn't be flying the Swastika. And even in Europe, chances are Nazi Germany would eventually dissolve itself back into its constituent republics just like the Soviet Union did, though likely not before every Jew and other “undesirable” in Europe was dead.

Godwin's Law of Time Travel can also be used in telling similar stories about other past war-losers and faded empires. The Confederacy, the Soviets, the Romans, the Greeks, the Mongols, the Egyptians, the Aztecs, and the colonial-era British are all possibilities. The Nazis are by far the most dominant in this field, however. Other than in steampunk, that is (but steampunk universes usually happen without time-travel).

When the time traveler tries to prevent the Third Reich altogether, and inevitably fails, it's Hitler's Time Travel Exemption Act. For the consequences of "Nazis Win" scenarios and other such stories that don't always involve time travel, see Alternate-History Nazi Victory and Day of the Jackboot.